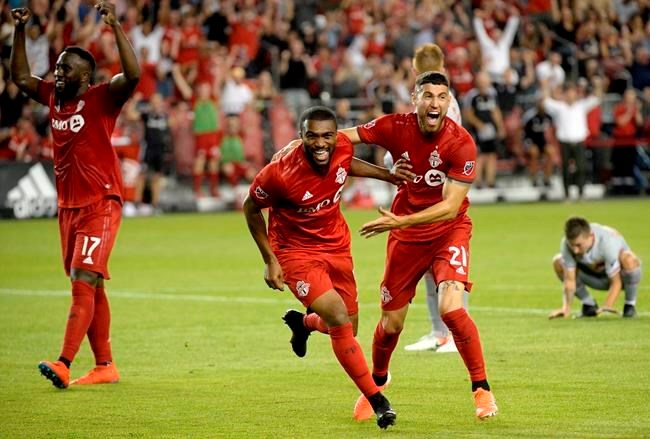 TORONTO — Jozy Altidore conjured up a goal to remember. Alejandro Pozuelo was clinical from the penalty spot. And substitute Ashtone Morgan closed out the night with a rarity — his second goal in 123 regular-season matches.

All three played their part along with goalkeeper Quentin Westberg as Toronto FC continued its resurgence with a 3-1 win over the New York Red Bulls in MLS play Wednesday. After a poor start to the season, Toronto (8-8-5) still has to hit top gear but is beginning to build some speed.

"We need to go on a little run here ... We knew tonight was an opportunity to kind of get some momentum," said Altidore.

Coach Greg Vanney liked a lot of what he saw but says there is still work to do.

"We had a couple of moments of just total naivete," he said. "I think there's also some times we need to put our pride in the back pocket and put the ball up the field ... We put ourselves under pressure sometimes trying to play out of some things that we didn't need to down the stretch."

A healthy roster and a few additions are helping turn the Toronto tide, as are timely goals and a fortified defence. Toronto, while still prone to some sloppiness, is showing a little swagger on the ball.

The announced crowd of 24,462 at BMO Field held its breath as Pozuelo went down in the 60th minute, turning his ankle after being kicked in the back of the leg by Derrick Etienne. The Spanish playmaker was promptly replaced but managed to walk off.

He was walking gingerly after the game with Vanney saying there was no immediate word on the extent of the injury.

It was 25 degrees at kickoff, with the temperature said to feel like 34 Celsius.

The home side came out firing on all cylinders and Altidore put Toronto ahead with a exquisite goal in the sixth minute. The U.S. international, with his back to goal, managed to backheel a fine Tsubasa Endoh cross low off the goalpost past a diving New York goalkeeper Luis Robles for a goal with a considerable degree of difficulty.

"An incredible touch. I don't know how else you get that ball into the goal other than to do that," said Vanney.

The goal, Altidore's seventh in 11 games this season, capped a 14-pass sequence — 10 of which came after Westberg played the ball at the back.

"A great ball from Tsubasa and it was a great team goal," said Altidore, not one to blow his own horn.

Pozuelo made it 2-0 from the penalty spot in the 26th minute after Kemar Lawrence brought down Richie Laryea in the penalty box. It was the Spaniard's ninth of the campaign.

The Red Bulls cut the lead to 2-1 through Tom Barlow in the 63rd minute and the momentum seemed to be shifting the visitors' way. But a mix-up between Robles and defender Kemar Lawrence in the 72nd minute — with both trying to get to a probing Altidore pass — left Morgan with an open goal.

The Canadian fullback, in the right place at the right time, scored just his second goal in 123 regular-season outings. The nine-year TFC veteran scored his only other in 2017.

Barlow scored after Etienne, having the better of Michael Bradley, fed the Red Bulls forward for an easy tap-in. Barlow lost defender Laurent Ciman on the play.

The victory moved Toronto up one spot into sixth place in the Eastern Conference. TFC is embarking on a key part of the schedule with eight straight games against East rivals after Saturday's visit by the Houston Dynamo.

"The plan is always to win your home games and get a tie or a result on the road and we felt tonight was a great opportunity to do that and to start the way we did is concerning," said Robles. "It is the second game in a row that we have given up a goal so early, and then not to play well the first half, we'll address it."

Both teams were coming off weekend derby victories, with Toronto winning 2-0 at Montreal and the Red Bulls edging visiting New York City FC 2-1.

Facing three games in a week, Vanney made three changes to the starting 11 in Montreal with Ciman, Laryea and Endoh coming in for Chris Mavinga, Auro and Nick DeLeon.

Ciman was partnered with newcomer Omar Gonzalez, giving Toronto a centre back pairing of former MLS defenders of the year.

"We were a little short of numbers a few weeks back. Now everybody's back on board and the competition is just greater for (playing) spots," said Westberg. "That brings the level up for our team. That's what really I think is helping us right now."

Barlow made his fourth start of the season up front for the Red Bulls. Star striker Bradley Wright-Phillips, whose last start was April 20 due to a groin injury, came off the bench in the 64th minute.

Brian White, who had started nine of the last 10 games, did not dress. Austrian winger Daniel Royer, who scored twice on the weekend, came on in the second half.

The game had its chippy moments with referee Silviu Petrescu issuing five cautions, four of which went to the Red Bulls.