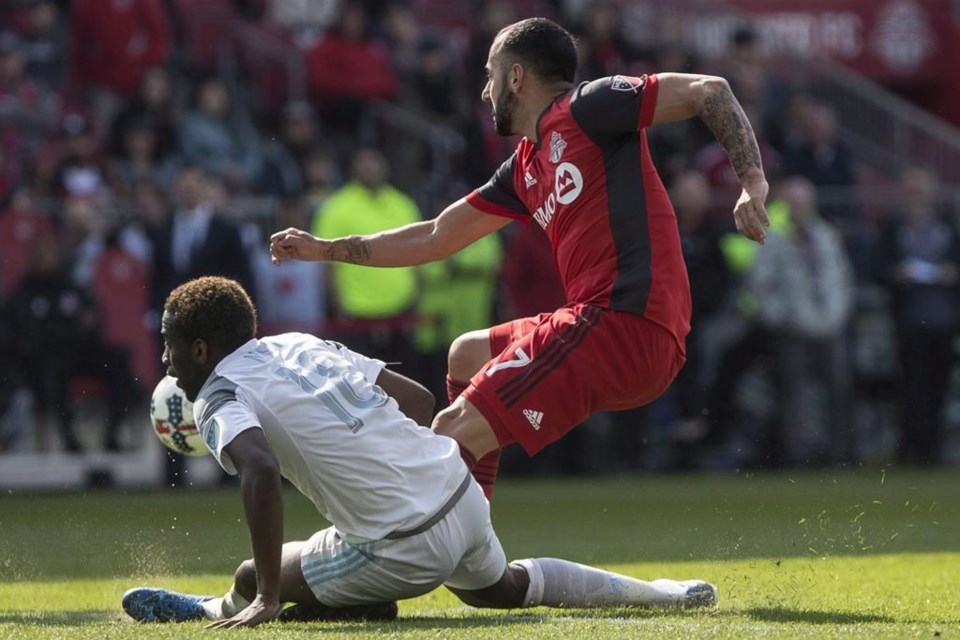 Toronto FC coach Greg Vanney challenged his team after it suffered its first loss of the season, a 3-2 setback at Seattle last weekend.

Losing to Seattle is nothing to be ashamed about, given the Sounders (5-0-1) are 20-2-3 in regular-season play since a 3-2 loss to visiting Portland last June. But TFC's 2-2 tie with visiting Chicago on April 6 still smarts, with both goals coming off defensive breakdowns.

Scoring goals has not been a problem for Toronto (3-1-1). But Vanney's squad will be looking to shore up its defence Friday when Minnesota United (3-2-1) visits.

Drew Moor's health has not helped the Toronto backline with an adductor injury restricting his play. Moor is the vocal conductor of the TFC defence.

Chris Mavinga's athleticism, normally his safety net when things start to go south, has not always been the answer this season and newcomer Laurent Ciman has yet to bed in.

Add in an injury to Brazilian fullback/winger Auro and Vanney's desire to establish a four-man backline has run into roadblocks. While Auro is expected to return Friday, Moor was training by himself Thursday — not a good sign.

The Loons have been road warriors this season, starting with five away games (3-2-0) while waiting for their US$250-million Allianz Field home to open. That came last weekend with Minnesota tying New York City FC 3-3.

Add to that the history between the two — 12 goals in their two meetings — and scoring would seem on the menu Friday.

"For us it's staying connected as a group," Vanney said of his defence. "I think last week we got disconnected and that led to some situations that became a little bit out of control, which is not where we want to be."

Vanney gave Quentin Westberg his first start in goal last week. The 32-year-old, who has French and U.S. roots, is prized for his distribution skills — a talent that the 24-year-old Alex Bono is still learning.

A return to Bono, an accomplished shotstopper, would seem to be in the cards Friday, although Vanney declined to say who his starter will be.

Bono played in the 3-2 win over Minnesota in 2017, one of just four of the 11 starters that day who remain with the team. Nick Hagglund, Jason Hernandez, Armando Cooper, Benoit Cheyrou, Raheem Edwards, Tosaint Ricketts and Sebastian Giovinco have all moved on.

Clint Irwin, now with Colorado, played in goal in last season's 4-3 loss to the Loons that saw Darwin Quintero score a hat trick.

"They've become a much different team over the last couple of years," Bono said of Minnesota, which entered the league in 2017. "So it's a new test, it's a new team ... They have a lot of good players, a lot of talent. They're fast.

"We're looking forward to it. It promises to be a high-paced game."

Friday's game will be the first on the new hybrid surface at BMO Field. The much-maligned playing surface has been reinforced by artificial fibres stitched into the grass — the same kind of technology used at Green Bay's Lambeau Field.

"I'm trying to debate whether I want to jump in the car and look or if I want to save it (for Friday)," said Vanney. "We already have a guy down there taking a look."

GOALS GALORE: The two teams have only played each other twice but the games have produced 12 goals in total. Minnesota won 4-3 last year thanks to a Darwin Quintero hat trick. Toronto won 3-2 in 2017.