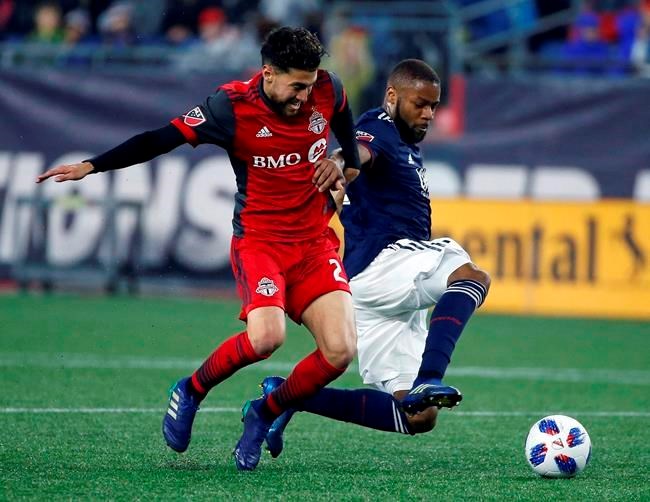 Toronto FC has had little joy on the road in New England over the years, but looks to break that hoodoo Saturday as it continues its final playoff push.

After defeating rival Montreal last weekend, Toronto (10-10-7) enters weekend play in eighth place in the East, just below the playoff line and the seventh-place Impact who have the same number of points but one more win. New England (10-9-8) stands sixth, one point ahead.

History is not on TFC's side this weekend.

Toronto's career record in New England is an underwhelming 2-10-4. The Revolution are undefeated in the past seven meetings (5-2-0) in Foxborough, Mass., dating back to 2014. New England has outscored Toronto 30-11 at home.

"It's a difficult place to play ... We just haven't gone there and really performed on a high level on the (artificial) turf," said Toronto coach Greg Vanney, adding: "That's going to change this weekend, I'm sure.

Star striker Danny Koevermans, a designated player from the Netherlands, wrecked his knee on the artificial turf there in July 2012.

New England leads the overall series between the two with a 13-8-9 record.

Bruce Arena, former U.S. national team coach and five-time MLS Cup champion, inherited a 3-8-2 team when he took over the Revs on May 14 as coach and sporting director. New England has gone 7-1-6 since.

"They're on a very good run," said Toronto captain Michael Bradley. "But this time of year you have to be ready to deal with all different types of games, all different circumstances. We understand that going to New England, playing on the turf, playing against a good team it will be a difficult match. But it's a match we're looking forward to."

While there are just seven games remaining in the regular season, Toronto remains a work in progress.

Vanney opted to sit Alejandro Pozuelo for the start of the game against Montreal before unleashing the Spanish playmaker in the second half. While Vanney was diplomatic abut the decision, it's clear he wants the talented Pozuelo to work his magic within the team's structure rather than freelance.

It would be a shock if Pozuelo did not return to the starting lineup Saturday.

The Toronto coach has plenty of options in midfield with newcomers Erickson Gallardo and Nicolas Benezet both starting against Montreal alongside Nick DeLeon and Marky Delgado with Bradley in his familiar holding midfield role.

Gallardo showed his speed against Montreal, proving to be a danger man down the flank.

"It's a squad that I feel very confident in right now and I think mentally we're in a good spot and ready to take on these last two months and see what we can do," added veteran defender Drew Moor. "

With just four points separating the fourth- to eighth-place teams in the East, there is little margin for error.

"Our target is to get three points in each of these (remaining) games, with the idea that in some of these games one point isn't the worst thing in the world," said Vanney.

FORM: Both teams are undefeated in their last three games.

LAST MEETING: Jozy Altidore scored in the 80th minute to give Toronto a 3-2 win in its home opener March 17.

PLAYER TO WATCH: New England's Gustavo Bou scored the 86th-minute winner in last week's 2-1 win over visiting Chicago. The Argentine forward has five goals in his first seven appearances with the Revolution, including two game-winners.