Warriors get DeMarcus Cousins back for Game 1 of NBA Finals 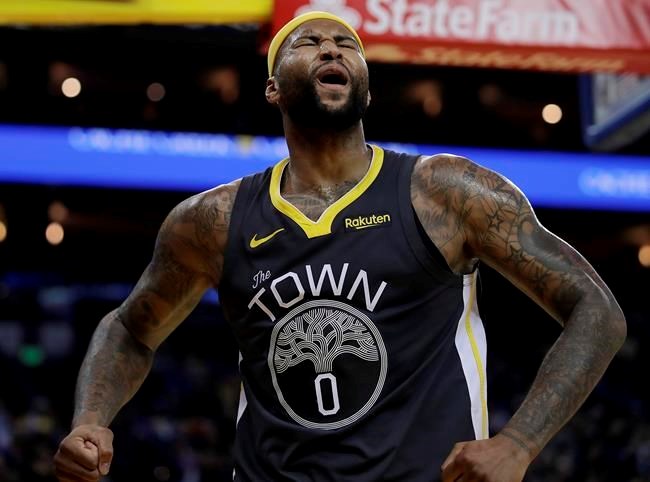 TORONTO — DeMarcus Cousins got his first taste of the NBA Finals on Thursday night.

Playing for the first time in 6 weeks, Cousins logged eight minutes in Golden State's 118-109 loss to the Toronto Raptors in Game 1 of the title series. Cousins finished with three points and two assists, missing both of his field-goal attempts.

Cousins had not been on the Warriors' active roster since tearing his left quadriceps muscle early in Game 2 of the Warriors' opening-round series against the Los Angeles Clippers. The Warriors originally thought Cousins' quad injury would be season-ending. He got hurt on April 15.

"I thought DeMarcus did a really nice job, made some great passes, we could run some through him," Warriors coach Steve Kerr said. "It's so early in the process for him. He played eight minutes and I thought his minutes were good, but it's a huge adjustment to play after a six-week, seven-week absence, especially at this level in the NBA Finals against a team that is pretty fast already."

Cousins said going into the series that he was ready to feel what the title series is all about.

"It felt great being part of that energy tonight," Cousins said "I've said it before and I'll say it again — I don't take any of these games for granted. To be out there on the floor tonight playing in that atmosphere was an incredible feeling. I'm extremely happy to be part of it and I enjoyed the moment."

"I thought he did really well and we'll look at the tape, and we'll see what we decide to do with his role going forward," Kerr said.

The comeback from the quad injury is just one in a series of comebacks over the last year for Cousins.

He ruptured his left Achilles in January 2018 and missed nearly a full year of NBA action. The injury dramatically reduced his asking price on the free-agent market last summer — instead of potentially being a max-contract player, the six-time All-Star signed a one-year, $5.3 million contract with the Warriors.

It was a low-risk, high-reward move for Golden State. The Warriors were coming off two straight titles and got to add an elite talent for mid-level money.

Cousins appeared in 30 games during the regular season, working himself into shape for the playoffs. He got hurt while chasing a loose ball and taking an awkward fall in the second game, and now will be working his way back into a rhythm for the Warriors — who are still without Kevin Durant while he recovers from a calf strain — during the finals.

"We all could have done a better job tonight," Cousins said. "We'll go back to the drawing board, look at our mistakes and we'll come out ready to play in Game 2."