The Volkswagen Golf was a fresh design that replaced the archaic Beetle in 1974. Volkswagen made use of Auto Union's experience with its Audi front-wheel drive cars and had famed Italian designer Giorgio Giugiaro do the styling of the Golf.
0
Oct 29, 2014 12:00 AM By: Garry Melnyk 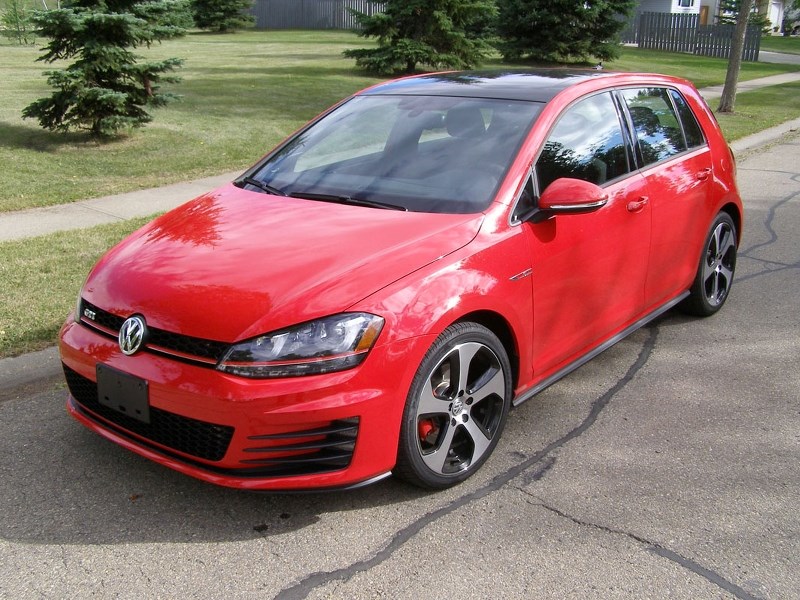 The Volkswagen Golf was a fresh design that replaced the archaic Beetle in 1974. Volkswagen made use of Auto Union’s experience with its Audi front-wheel drive cars and had famed Italian designer Giorgio Giugiaro do the styling of the Golf. The result was a simple, compact, yet roomy design. The car was named Golf in most countries, Rabbit in Canada and the U.S. It proved to be a hit selling a million vehicles by October 1976. This was also the year that VW gave birth to the Golf GTI with a peppy, 1.6-litre, 108 horsepower, four-cylinder engine.

The GTI has been one of Volkswagen's most iconic models for nearly 40 years using its unique blend of sportiness, efficiency and practicality to win legions of fans in over a hundred nations. Competitors have come and gone, but few cars in its class can boast a similar presence generation after generation. All new for the latest model year, the seventh-gen GTI looks a lot like the sixth-gen model when viewed from the outside because it wears an evolutionary design, but nearly everything has changed under the skin. This little hatch is longer, lower and wider, it has 10 per cent more luggage space, it’s 10 per cent stiffer and in spite of this, the new GTI is 23-kilograms lighter, which helps overall performance.

The GTI has had a cult following since its beginning and Volkswagen has been wise over the decades not to tamper with a successful formula. The famous tartan seats continue to add a little flare in the interior which is driver oriented with supportive seats, a chunky flat-bottomed steering wheel and clean instrumentation. Yes, the car has gone up market with VW’s Discover Media navigation system which has a touch-sensitive screen and a proximity sensor. Moving one’s hand toward the screen sees a menu rise up from the bottom of the screen. It is neat, but it’s also a necessity – the screen is small without the icons, it’s cluttered with them.

But I have one gripe relating to instruments and controls. This has to do with the cruise control switch on the steering wheel. It’s a clunky design not at all intuitive. On the plus side, the rear camera is an asset for backing up. Although visibility out the rear window is quite good, I have mixed feelings about this gimmick as I’m not one to depend on electronic aids when driving. The centre console is a small thing good enough to hold sunglasses and not much else. The audio system is by Fender and while I expected something special from the guitar and amplifier manufacturer, that wasn’t to be. Oh sure it sounds good, but I’ve heard better audio systems in other new cars and trucks.

Seating comfort is good and the driver can adjust the steering wheel for tilt and telescope it to bring it closer or farther away. VW engineers have done a great job in the use of sound deadening built into the vehicle. This makes the passenger compartment very quiet even at highway speed.

Driving with the sunroof open is not as bad an experience as I expected. The noise level is low with minimal buffeting. In fact you can carry on a conversation with the front seat passenger and not have to raise your voice very high. At least driving around town. Visibility is good in all directions with abundant glass to see out. Cargo capacity is good and made better with the fold down rear seat. The seats don’t fold flat however, a minor detail I suppose, but annoying to some people.

The seventh generation GTI is powered by a 2.0-litre, turbocharged four-cylinder that produces 210 horsepower and more importantly, 258 pound-feet of torque at just 1,600 rpm. This means that there’s little turbo lag off the line and the urge onward builds very strongly through the mid-range. If you like rowing gears, the six-speed manual transmission with this engine is a good match; a slick unit that’s easy to use with light clutch action. Be crazy and you can chirp the tires off the line and leave other cars quickly behind. Get the engine above 2,000 rpm and you’ll find the GTI still has some grunt on reserve. You’ll have to be at very illegal speeds before this car runs out of breath.

The little engine while providing great performance is also good at sipping fuel when you decide to ease the pressure on the go pedal. The GTI is rated at 9.4L/100km around town and 6.9L/100km on the open highway. My combination of around town and some highway driving netted me 7.8L/100km (35 mpg).

When it was introduced decades ago, the GTI built its reputation not just on the performance of its engine, but the handling it delivered. The 2015 model carries on the tradition with a suspension is that taut, yet still delivers a nicely damped ride in the city. The variable ratio electric steering also takes a turn for the better. It responds well to driver input and unlike so many electric systems, gives good feedback. On the road, the GTI has that tight, precise ride you expect of a German car, eager to dive into corners with good grip in the curves. I just couldn’t get enough of this car. Unfortunately there was no time to get out to some twisty highway and really take in the driving experience.

Built tight with no squeaks or groans which is expected of a German engineered car, quality workmanship continues to be a hallmark of the Golf GTI. You get a long list of standard features whether opting for the three-door or five-door model. My test car was the five-door loaded with almost everything except the six-speed Tiptronic automatic transmission. The base three-door GTI with a six-speed manual gearbox starts at $27,995. The five-door with starts at $32,895.

The latter is very well equipped and I would say a real bargain if you want a roomy, good handling, economical car and enjoy driving whether that be around town or on the highway. This is not the car for a person who considers the automobile an appliance to take him or her from point A to point B.

OPINION: An industry on the upswing
Feb 5, 2020 10:00 AM
Comments
We welcome your feedback and encourage you to share your thoughts on this story. We ask that you be respectful of others and their points of view, refrain from personal attacks and stay on topic. To learn about our commenting policies and how we moderate, please read our Community Guidelines.