Episode 10: From St. Albert to Ulukhaktok, NWT, with love

“Eventually this barge gets out into the ocean and to Ulukhaktok and the ice is only gone for a very short time and so the timing is crucial.:
May 22, 2021 8:00 AM By: Jennifer Henderson, Local Journalism Initiative reporter 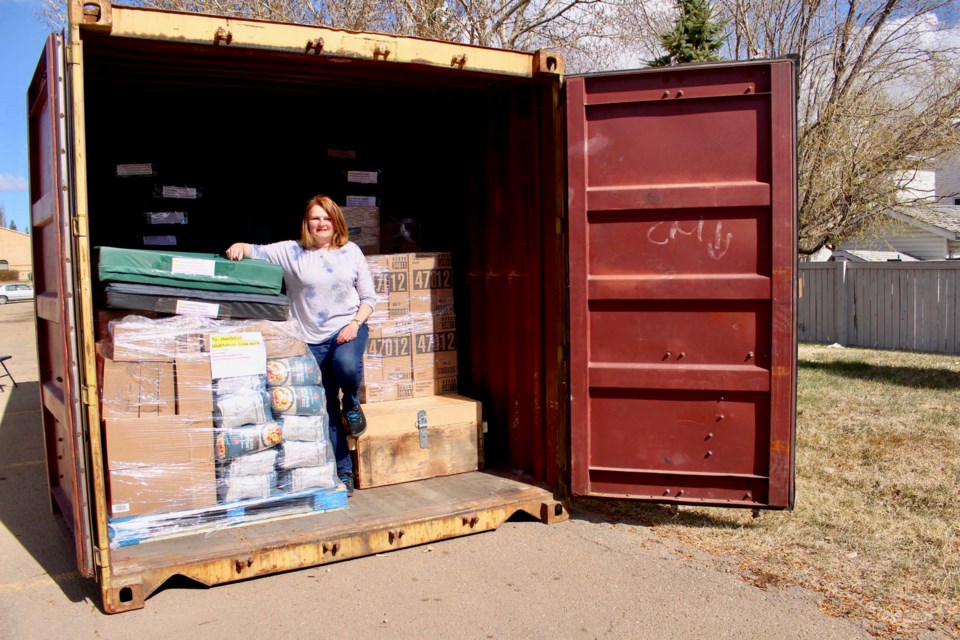 Linda Tutt stands in a sea can full of donations for the northern community of Ulukhaktok. Food prices are very expensive in the hamlet and Tutt is an organizer with the North of 60 program which helps gather and ship food and other donations for residents in need in northern and remote communities. JENNIFER HENDERSON/St. Albert Gazette

Every year in the summer, a barge full of sea cans sails up the Mackenzie River from Hay River, NWT, heading to the Beaufort Sea.

With carefully calculated timing, it stops in at some of the Northwest Territories' most remote communities: Tsiigehtchic, Paulatuk, Aklavik, Sachs Harbour, Fort McPherson, Tuktoyaktuk, Fort Good Hope and, sometime in August, Ulukhaktok.

The barge bears gifts from across the Edmonton area, full of food, sewing supplies and other goods. One sea can, filled up here in St. Albert, is destined for Ulukhaktok.

Ulukhaktok, a hamlet of roughly 400 people, sits on the west coast of Victoria Island, in the Beaufort Delta region. Its residents hunt, fish, trap and create beautiful works of art. Since 2016, Linda Tutt, the chair for the St. Albert arm of the Society of St. Vincent de Paul's North of 60 Project, has helped fill a sea can each year with donations for the remote northern community.

“Eventually this barge gets out into the ocean and to Ulukhaktok, and the ice is only gone for a very short time and so the timing is crucial. So they get it at the end of August and that's pretty well the end of their open water,” Tutt explained.

Tutt organizes St. Albert's efforts for its northern friends, putting together a 20-foot sea can worth of donations each year. Sewing machines, non-perishable foods, art supplies, infant and baby items and sleeping mats are all gathered.

Most of the communty's non-perishable food and goods like ATV’s, lumber or tools come up on the barge in August, Tutt said – the only barge that comes in during the entire year. For the rest of the year, food and other goods must be flown into the community, making prices high in the community.

As a result, food is very expensive, Tutt explained.

“The food is just unbelievably expensive so that's why our food goes to the school program. They give the kids breakfast and lunch,” Tutt said.

Along with the schools, food goes to the food bank in the community for those in need.

Tutt stays in communication with the hamlet to track what they will need for the year. Then in April, she begins to collect items from St. Albertans and stores much of them in her garage until the sea can is ready to be loaded in May.

Before the barge arrives in August, Tutt said the community tends to run short on food and supplies.

Last year, Tutt wasn’t sure if they would be able to collect donations due to COVID-19, but  Peter Ouellette, from the Western Regional Council for the project, said the communities would need the food now more than ever.

Usually, parishioners attending the Holy Family Catholic Church would drop off donations after their service, but over the past two years Tutt has asked for monetary donations so she can purchase non-perishable food to send up north.

Tutt then collects everything in her garage and labels it all for the different organizations it will support once it arrives up north.

In May, Tutt and a group of volunteers spend a day loading the container.  The can will head to a truck yard until June, when it heads to Hay River, then eventually up the Mackenzie River.

North of 60 is a program run by the Society of Saint Vincent de Paul and there are eight sea cans sent to nine northern communities annually.