The Blog from Outer Space

Ahh… Halloween, All Hallow’s Eve, Samhain, fright night, CANDYDAY. There are many ways to celebrate the end of October. For many, it’s a great excuse to put on costumes and let the unseen spirits that surround us to flow and dance.
Oct 31, 2014 1:00 AM By: Scott Hayes 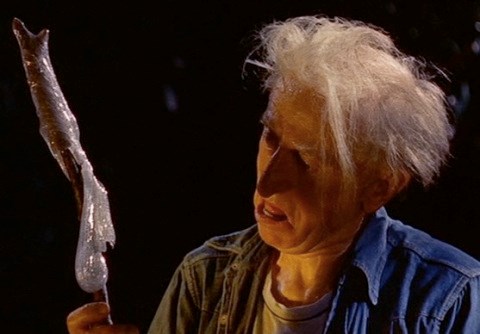 Gesundheit! Actor Olin Howland checks out the mystery goop on a stick that would go on to wreak havoc in this classic horror movie.

Ahh… Halloween, All Hallow’s Eve, Samhain, fright night, CANDYDAY. There are many ways to celebrate the end of October. For many, it’s a great excuse to put on costumes and let the unseen spirits that surround us to flow and dance. For others, it’s the perfect season to put on a scary flick or two and have some scream therapy.

And that’s why I’m offering up this blog post. People ask me questions, they say, “Scott, what are your favourite scary movies of all time?” And I say, “These ones!”

This is the all-time chomping champ of horrors and well, movies in general, if you ask me. Apart from being the first and greatest of summer blockbusters, it has a lethal combo of all three literary conflicts (human vs. nature, human vs. human, human vs. himself), making it a great literature and language arts lesson. It also has Big Bad Bruce, the toothiest, terriblest and most terrifying of all the mechanical sharks to hit the big screen in 1975. I first saw it with my parents at the drive-in when I was two years old and I’m still scared witless at the mere thought of swimming in the ocean.

I’m also scared of drive-ins… but I digress.

If you don’t know the story, perhaps it’s time to check it out. A monstrous great white shark takes up territory on a small fictional island on the eastern seaboard of the United States. The hydrophobic sheriff has to team up with an oceanographic scientist and an ornery sea captain in order to finish off the pernicious and devilish beast, and make the beach safe for the tourist town once again. It’s a simple story but one told with effectiveness, humanity, and several classic lines and scenes. It has it all.

Moreover, the casting is perfect and the characters are brilliantly portrayed. It also served to establish the director as a name to be reckoned with to this very day: Steven Spielberg. You can ignore all of the sequels. You can forget all of the imitators, all of the creature features with titles like Lake Placid, Rogue, Deep Blue Sea… there’s nothing that beats the original.

Did I forget to mention that it’s also based on a true story? True story!

In the 1980s, there wasn’t anything that John Carpenter and Kurt Russell couldn’t do as a team that I didn’t think was gold. Even Big Trouble in Little China was a comedic gem. Escape from New York was a grizzled action masterpiece. But in my mind, nothing tops this ugly beauty about a scientific research team in Antarctica that stumbles upon a frozen biological entity that seems vaguely human. Once it thaws, however, the Thing goes from bad to much, much worse.

It turns out that the alien is a shapeshifter and can take the form of any animal or human, utterly destroying the original in the process. It’s completely monstrous, and soon leads the crew to the depths of paranoia and suspicion. No one knows who is real and who is alien. That, coupled with the claustrophobia and seclusion of the Antarctic locale, makes this a wonderfully atmospheric and tense thriller.

Don’t forget the incredible creatures and other effects that were produced by Rob Bottin and Stan Winston. The former would go on to future glory, working on films including RoboCop and Total Recall, while the latter proved to be a master among masters, with The Terminator, Alien, Predator, Jurassic Park and Iron Man, among others. I'm a huge fan of practical effects and these guys absolutely nailed it on this classic.

All of these elements combine together to create a movie that I could watch over and over again, and always with a stiff drink or two. The prequel (weirdly also called The Thing) wasn’t bad either but don’t be fooled by imitators. The first here is the best.

An American Werewolf in London (1981)

Speaking of old school effects masters, I would vote for Rick Baker as class president, chairman and chief executive any old day of the week. The guy has been nominated ten times for the Academy Award for Best Makeup, winning seven of the golden boys – a record in that category. They should just go ahead and call it The Golden Rick.

And the first trophy he took home was for An American Werewolf in London.

Perhaps taking its cue from Warren Zevon’s brilliant and darkly humourous song Werewolves in London, the movie tells of an American tourist on a backpacking vacation with his buddy when the two of them get attacked by a beast in the night. Yes, you guessed right… he turns into a werewolf and goes on a bloody rampage, all set to probably the most thematically-focused soundtrack ever. Zevon is there, of course, as are Van Morrison singing Moondance, Sam Cooke’s Blue Moon, Bad Moon Rising by CCR… get the picture? Yeah, you got the picture.

That’s pretty much it for the story, actually, but you have to see it if only for Baker’s creatures. That initial transformation scene is legendary and absolutely unforgettable. Without those effects, we wouldn’t have had Michael Jackson’s Thriller video, and where would the world be then?

p.s. Do yourself a favour and skip the abhorrent late 1990s sequel set in Paris. Zut alors!

A somewhat more modern tale, arriving in theatres several years ago when the abominable Saw and Hostel movies were starting to come into some sort of vomitous vogue. A quartet of American tourists in Mexico set out to explore an archaeological site centered on an ancient vine-covered Mayan temple. Once they step on the ruins, however, they can’t go back. A group of villagers surrounds them and forcefully keeps them on the structure with the threat of death.

Why? They soon learn the reason.

Those vines must have been related to Venus Flytraps. After one night, they find that the vines have become attached to their skin. It gets more insidious after that, as the seemingly sentient vegetation has a thirst for blood and torture that makes the whole 90-minute misadventure an exercise in regurgitation suppression. I first watched this in a packed theatre on a hot summer evening with a backfiring air conditioner. Everyone was sweating and as uncomfortable as those poor people on that jungle fight for their lives.

And that’s why I don’t trust plants.

If you like a little blood with your horror movie then you’ll get your money’s worth with The Descent. Also, the story is pretty good too, if that matters to anyone.

A woman bereaves the tragic deaths of her husband and daughter. Going on a cave-diving expedition with five good friends sounds like a good way to get away from emotional turmoil at home, right?

Hint: I wouldn’t be writing this if that were true.

Indeed, their expedition doesn’t go as spelunk-tastic as they expected it would. A tremor causes a tunnel to collapse, forcing the group to go deeper than they had planned. Way below the surface, they encounter strange creatures in the darkness. There’s not much growing for plant life so far down, so you can bet that they aren’t vegetarians.

The explorers find themselves in a race and a battle with the odds stacked heavily against them. If you don’t suffer claustrophobia, you might develop it after this bloody yarn. There’s nothing quite like it.

Ahhh… I reminisce about the days before Paranormal Activity and all of these new demon possession movies. Bo-RING! Give me Poltergeist any old day of the week.

It’s directed by Tobe Hooper, he of Texas Chain Saw Massacre, Lifeforce and lesser flicks with such awesome names as Invaders from Mars, Spontaneous Combustion, Eaten Alive, Night Terrors, Body Bags and The Mangler. This movie, however, came out earlier on his career, and way before he descended into relative obscurity.

A happy family of five moves into a new house in a new neighbourhood. Real estate developer dad Steven had the inside track on some hot property. Sadly, even he wasn’t aware of what the streets and homes were built upon.

Eerie events start to occur, first with youngest daughter Carol-Anne talking to the television, then chairs rearranging themselves, then a storm plays backdrop as a gnarled tree bursts through son Robbie’s bedroom window and plucks him out of bed. That diverts everyone’s attentions away from the young girl as she seemingly gets consumed by her closet, disappearing into the ether. Yikes!

Who ya gonna call, am I right? Sadly, this was still two years before Ghost Busters so the family dials up a spiritual medium. It comes to light that there used to be a graveyard on the site, and the deceased are none too pleased about having split-levels and bungalows resting on their final resting places. Who could blame them?

There’s a lot of great effects (both practical and technical) in this movie, plus a swimming pool scene featuring real human skeletons. Plastic ones were too impractical, for some reason. Considering this information in combination with the plot of the movie, it seems like a no-brainer why some people say that a Poltergeist curse claimed the lives of four of the actors in the series.

Side note: I’m not sure how I feel that this is being remade into a new movie set for release next year. Sam Rockwell is a helluva actor, however.

I’m only allowing only one Stephen King movie on this list, and surprise! It’s not The Shining.

The Mist, for my money, is by far one of the Horror Master’s strongest film translations, undoubtedly thanks to director Frank Darabont. He’s the same guy that also directed Shawshank Redemption and The Green Mile, two gems also from the same hand as this one.

A small New England town (don’t all of King's stories start this way?) experiences a strange fog that covers everything, stranding a small group of people in a grocery store. There’s something out there, they say, and boy, they ain’t kidding! A military experiment has gone awry, opening up a portal to another dimension, one that’s filled with monsters that seem like the devil spawn of H.R. Giger and Salvador Dalí. These things are all kinds of nasty.

Some of the people stuck inside the story are pretty nasty too, making this a Thing-like nightmare of alien/paranoia/personality clashing proportions.

The absolute best part of this catastrophe on film is that it doesn’t cater to North American audiences who are famously always looking for a happy ending. Kudos to Darabont for sticking to his gun on that one. I would say confidently that this is not a movie you want to watch on a romantic date. Trust me.

Yeah, sure… there’s more of my favourite horror movies out there: Alien, The Shining, The Exorcist, Twilight Zone... Check back in a year and I’ll offer more suggestions with The Blog from Outer Space: Part 2!