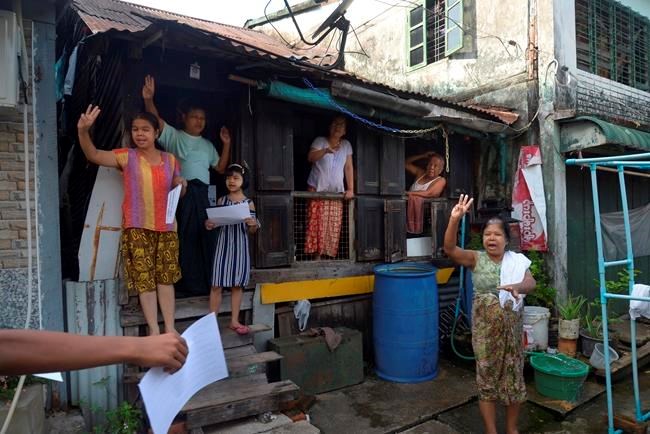 YANGON, Myanmar — Security forces on Wednesday stormed a town in northwestern Myanmar where some residents had used homemade hunting rifles to resist the military's February seizure of power, killing at least 11 civilians and injuring many others, local news reports said.

If the 11 deaths are confirmed, it would be one of the highest single-day death tolls outside the country's two largest cities, Yangon and Mandalay.

The online news site Khonumthung Burmese said the attack on Kalay began before dawn. Videos on the site included what appeared to be sounds of rifle fire, high- weapons and grenade explosions. Posts on social media said rocket-propelled grenades were used in the attack, but provided no evidence.

The news site said that in addition to the seven fatalities, many people were wounded and arrested in the town, also known as Kalemyo or Kale. Over half the town's population are members of the Chin ethnic minority.

Most of the deaths occurred in the morning, but more were reported in the afternoon, bringing the total to 11, according to the news sites The Irrawaddy and Myanmar Now.

Security forces have killed at least 581 protesters and bystanders through Tuesday in their crackdown on protests against the Feb. 1 coup that ousted the elected government of Aung San Suu Kyi, according to the Assistance Association for Political Prisoners, which monitors casualties and arrests.

Nearly all of the protests have been nonviolent, but as police and soldiers have increased their use of lethal force, some participants have armed themselves with homemade weapons such as gasoline bombs for self-. In Kalay, some residents took up simple but deadly homemade hunting rifles.

Myanmar Now reported Tuesday that protesters in Kalay had set up strongholds and inflicted casualties on the security forces.

It said that on March 28, when the army sought to attack Kalay, protesters in the town and nearby villages put up fierce resistance. The attack took place a day after the junta's forces killed more than 110 people around the country, the highest single-day death toll since the coup.

The report said protesters “more than held their own. Four of them died that night, but so did an equal number of the enemy, including an officer or two. The protesters also managed to wound 17 of their heavily armed attackers.”

The protesters, who have organized themselves in a “Kalay Civil Army,” inflicted more casualties in the following days, it said.

Dozens burned a Chinese flag and marched in Yangon's Ahlone township calling for a boycott of Chinese-made products. Many protesters believe that Beijing is backing the military regime with economic and political support, including the threat of a veto at the U.N. Security Council against any international sanctions.