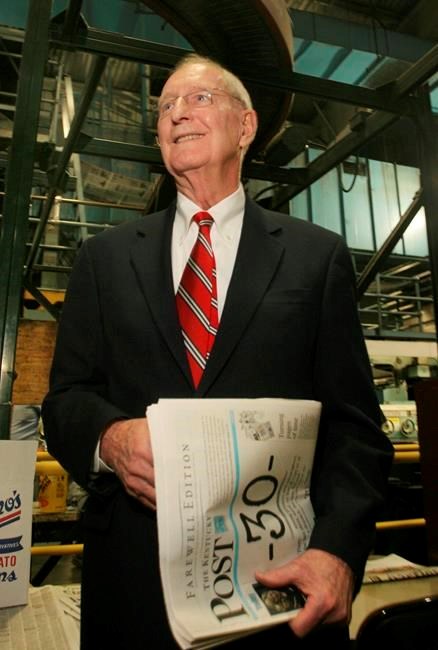 CINCINNATI — Bill Keating is remembered widely as gentlemanly, considerate and modest. Underneath that genial exterior was a fiercely competitive and driven athlete, lawyer, politician and news executive.

He was highly successful in all those fields.

Keating, who died Wednesday at age 93, was an all-state swimmer at St. Xavier High School and captained the University of Cincinnati swim team. He helped build a law practice from scratch into a major firm, and rose quickly from municipal judge to Republican congressman. Then he used his political skills and business entrepreneurship to become a prominent news industry executive for The Cincinnati Enquirer, Gannett Co. and The Associated Press over three decades.

“Some people are driven and it just pours out of them,” said Louis D. Boccardi, former president and CEO of The Associated Press, which Keating chaired in 1987-’92. “In Bill’s case, he had a very quiet, very controlled, modest exterior. But there was no doubt about his objectives.”

“Competition and winning,” Keating said in a 2005 oral history interview with an Associated Press archivist. “You know the old story, winning isn’t the thing, it’s the only thing. ... You can’t always win, but you can sure try.”

William J. “Bill” Keating died in Cincinnati, the city where he was born, represented in Congress, and had been president, CEO and publisher of The Enquirer. He served on the board of the AP for 25 years and held executive positions at Gannett Co.

Boccardi remembered Keating as thoughtful and deferential. He said Keating exhibited the abilities of a skilled politician in leading the AP board, loaded with some of the newspaper industry’s most powerful figures.

“Bill was masterful,” he said. “He had political instincts, and I mean that in the best sense. He knew his constituency. He was very careful and considerate of the views of other people.”

Douglas H. McCorkindale, retired CEO and chairman of Gannett, noted that Keating served in Congress during a time when representatives were more likely than today to try to work out deals and compromises while getting along with each other. He called that approach “The Keating style.”

“Bill was able to get things done by working with people,” said McCorkindale, also a former AP board member.

U.S. Sen. Rob Portman, a Cincinnati area Republican, mourned Keating as “a mentor to me and a dear friend who never met a stranger.”

Keating's longtime law partner, Donald Klekamp, said Keating was guided by his Christian beliefs and wanted to lead by example.

“We have lost a real icon,” Klekamp said.

Boccardi said Keating was someone who was “always early” for everything, and committed to doing things the right way, even when it came to crossing a New York City street. Boccardi recalled charging across Madison Avenue only to realize Keating hadn’t followed him, instead going down to the crosswalk to wait for the light to change. In Cincinnati, going to lunch with Keating “was an adventure.” It seemed as if nearly everyone in Cincinnati knew him, Boccardi said.

But it wasn’t just the top news and civic leaders Keating left an impression on. Former Enquirer staffers said he made an effort to know everyone, including workers at the printing presses and the greenest reporters.

Howard Wilkinson, a veteran political columnist in Cincinnati, recalled being summoned to the publisher’s office on his second day of work in 1982. Nervously, he sat down and answered his questions about how things were going in his new job. Pleased that his new reporter said all was well, Keating pulled from his big oak desk the page 1 printing plate of that day’s Enquirer he had had delivered from the newspaper’s off-site printing . He handed it to Wilkinson, a keepsake of his first front-page byline.

“That was something the man did not have to do,” said Wilkinson, recounting the scene decades later. “It was an act of kindness I have never forgotten.”

Keating served in the U.S. Navy at the end of World War II, then studied business administration at the University of Cincinnati and went on to earn his law degree there while also being in the Air Force Reserve.

He was a founding partner of a law firm that grew from three lawyers to 120 today.

Keating served several state and local positions, then ran for an open U.S. House seat in 1971 as a Republican. He won that year and in 1973 by landslide margins.

In 1974, he gave up his congressional seat in midterm to respond to a request by Carl Lindner Jr., a law client and perhaps Cincinnati’s most powerful businessman, to run the newspaper Lindner had bought a few years earlier.

“I said, ‘I don’t know anything about newspapers except to be interviewed,’ “ Keating recalled. “I came back, and just lived there. Trying to figure out how it worked.”

The paper was bought by Gannett, and Keating held several executive posts for the company.

While his brother Charles Keating was a finance executive who became a controversial figure in the 1980s national savings and loan crisis, Bill Keating maintained a high ethical reputation.

Keating was particularly proud of his AP connection. His AP time saw increased strategic planning and the news launch electronic photo delivery and a video news service, as the industry moved toward the age of digital, 24-hour online news.

Boccardi praised Keating as a highly supportive, engaged chairman who provided “a very sure hand on the wheel.” One of the dominant issues of Keating’s time was the captivity of AP foreign correspondent Terry Anderson, held hostage for nearly seven years after being kidnapped in Beirut, Lebanon. Keating got frequent updates from Boccardi, and stayed involved in behind-the-scenes efforts with the White House, State Department, the United Nations and other entities that finally led to Anderson’s release in 1991.

“He was very concerned, and expressed that concern frequently; sympathetic and supportive," Boccardi said.

Keating retained “a great affinity” for The AP and its people, and he in 2008 took chairmanship of the AP Emergency Relief Fund, helping build a pool of donations to help staffers and their families who suffer losses at home because of disasters or conflicts. He led a fundraising drive that increased the fund by more than five-fold.

“There’s something about the AP. It gets in your blood,” Keating said in the 2005 interview. “Even as a non-AP person but being on the board and being exposed to the people of the AP, it’s one of the great experiences that you have in your life. They’re dedicated people. They come from all types of backgrounds. They really are in the service. ... I’ve been involved with a lot of different organizations, and this is special.”