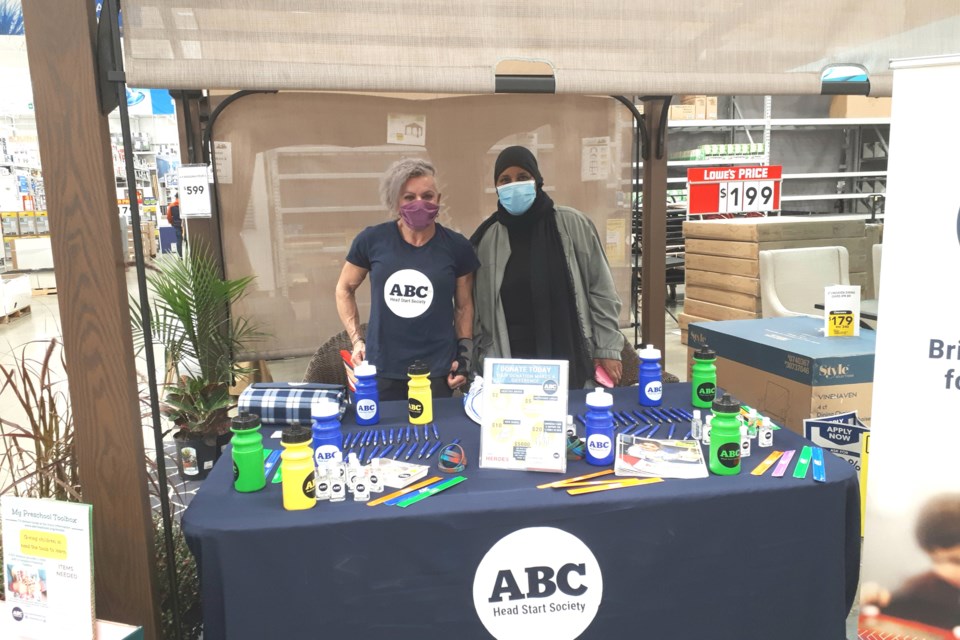 Two volunteers from ABC Head Start Society, Leidia Siffledeen and Asha Hersi, were photographed at a booth at Lowe's Canada on Sept. 19. The St. Albert home improvement store is hosting a fundraiser for the charity until Sept. 30.

Since ABC Head Start was developed more than 30 years ago to assist marginalized families, it has made a big difference in the lives of thousands.

The free program, operated through a registered charity, gives vulnerable children under the age of five the best possible early learning and developmental opportunities to ensure a confident future.

For Hiba and Rami Warde at the St. Albert Bottle Refund Center, it was a game changer. The adventurous couple emigrated from Dubai in 2015 with two children under the age of three, a daughter Haya and son Mahmoud.

“We were speaking Arabic. To make the shift to go to school, the children needed English. It (Head Start) was a good choice,” said Hiba.

“Plus the English, they start to learn the routine in school and how to interact with other children. When we first came, we didn’t have family and it was a good chance for playmates.”

Head Start also brings in specialists in case children require additional assistance. Both Haya and Mahmoud were given speech tests to see if they needed extra support. Far from requiring extra aid, the children learned to speak English fluently within a month.

“For little kids, it’s so easy to start with a new atmosphere, not like adults,” Hiba laughed.

“Sometimes we have a movie night. The extra activities are good for the family, and you can also meet other families. It’s useful and it’s fun.”

New findings in neuroscience and cognitive research in the past 50 years confirms the importance of early childhood development.

To ensure the program’s success, Lowe’s Canada in St. Albert is running its annual fundraiser until Sept. 30. It hopes to raise $10,000. So far, a thermometer display marks $3,000.

Every September, the home improvement store selects a children’s charity to support the entire month. Last year, Kids Kottage was the charity of choice, and in 2018 Lowe’s selected the Stollery Children’s Hospital.

“Lowe’s supports children because they are underage and don’t have a voice. And right now there are a lot of families in an economic and COVID crisis struggling and don’t know where to go. Lowe’s has a soft spot for children. I do too. I’d do anything for them. We focus on getting what we can for charity in food, clothing and school supplies,” said Shelley Korolak, plumbing and electrical manager as well as fundraising leader.

Volunteers have organized four different ways to contribute monetarily. A bottle drive is set up in the parking lot and people are encouraged to drop off bottles at a signed station.

Anyone can also give a donation, large or small at the tills. In addition, anyone who donates more than $100 will have their name entered in a raffle to win a home handyman’s dream package.

And lastly, staff built a “wishing well.” They emptied a water cooler and are inviting visitors to throw in spare change and make a wish.

“The best thing about the program is that it teaches kids to read, write and play. It lets kids be kids and learn at the same time. Not only do they teach kids, they make them feel loved, safe and secure. They get snacks and life becomes something it should be," Korolak said.