Alberta beekeepers could lose up to 30 per cent of their hives this year due to a bad winter last year and the impact of COVID-19.
Jul 9, 2020 5:40 PM By: Jennifer Henderson, Local Journalism Initiative reporter 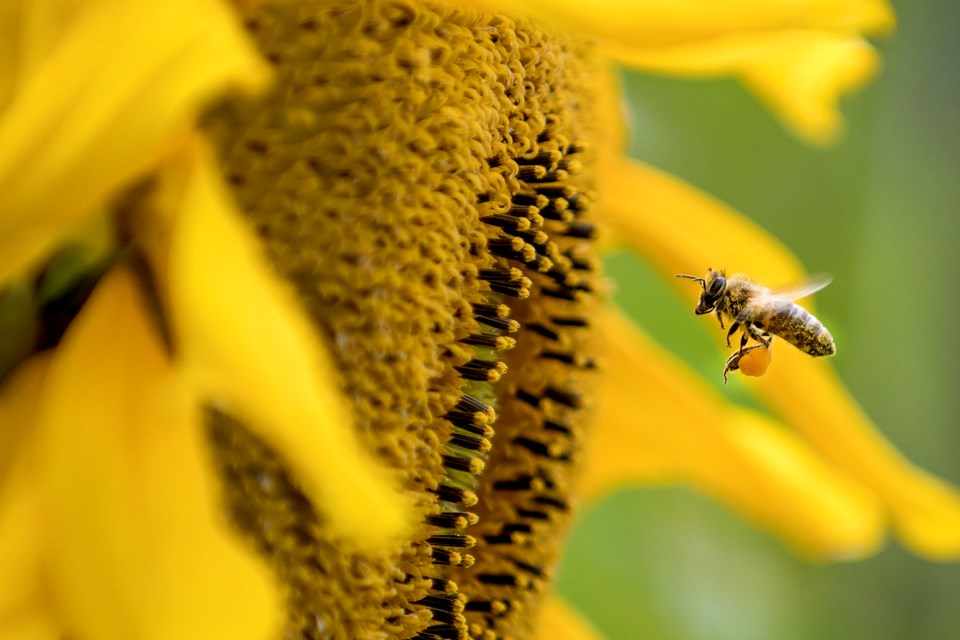 A pollen-laden honeybee forages for nectar from a sunflower at Prairie Gardens and Adventure Farm near Namao on Sept. 4, 2019. DAN RIEDLHUBER/St. Albert Gazette

Alberta beekeepers could lose twice as many hives this year as they usually do, following a bad winter and impacts of COVID-19.

Connie Phillips, executive director of the Alberta Beekeepers Commission which tracks and represents beekeepers, said beekeepers are losing an average of 30 per cent of their hives, with some beekeepers tracking losses up to 90 per cent. That’s up from the 15 to 20 per cent they might lose over a typical winter.

Phillips said normally, beekeepers can recover from winter deaths. But once losses push 30 per cent, it gets harder to build numbers back up.

“The numbers of hives are all tied to the amount of honey you're producing, which is how they make money,” Phillips said.

"There were a lot of factors inhibiting honey production. A lot of beekeepers really struggled on an average as a province,” Phillips said.

Alberta beekeepers rely on temporary foreign workers to help take care of bees in the spring, especially when the critters wake up early before flowers start blooming.

Jeremy Olthof, owner of Tees Bees Inc. and president of the Alberta Beekeeping Commission, said getting skilled seasonal workers into the province was very challenging this year as COVID-19 restrictions shut down border travel.

Olthof tried to bring in eight workers from Mexico but ended up only being able to bring in six due to the pandemic restrictions. The beekeeper said he was lucky this year and was able to find some local help by bringing in a few teenagers to help out as well.

Those six workers were also more expensive to bring in than normal, since they had to quarantine once they arrived in Canada. However, Olthof said he qualifies for a quarantine subsidy to offset that cost.

Some 30 per cent of the people hired to work in beekeeping are skilled seasonal workers from out of the country, which totals around 400 staff members in Alberta, according to Phillips.

Those workers help split strong hives into two separate colonies – one of the ways beekeepers deal with winter hive loss. Without those workers, the process of splitting up hives becomes more challenging.

Last year, Olthof had around 4,800 hives. After losing 20 to 25 per cent of them over winter, he was able to build his numbers up to 4,500 this year by splitting his hives, but he still wasn’t able to recover fully.

Beekeepers who can’t recover all their losses by splitting hives have to import bees from out of the country to build their numbers back up. Canadian beekeepers import from Australia, New Zealand and Chile, but the COVID-19 pandemic meant all live animal transfers were put on ice.

Bill Termeer, the Alberta Beekeeping Commission member representing the Peace Region, owns and directs Moondance Honey north of Sexsmith. He said he lost half his bees this winter – just 2,500 of his 5,000 hives survived.

In Peace Country, Termeer said losses typically hit 30 per cent – which, while difficult to recover from, can usually be made up by splitting hives. But not only did he lose half his hives this spring, he also had to shut down 10 per cent of them last fall because they weren’t viable.

That was too big a loss to bounce back from by splitting hives, forcing Termeer to purchase bees instead.

Olthof said queen bees are usually flown into Edmonton, where beekeepers can pick them up or get them shipped to an airport closer to them. That wasn’t possible this year because of pandemic restrictions.

Beekeepers told the Gazette Derek Johnston, manager of member relations with Bee Maid, helped out beekeepers by making frequent trips to the Vancouver area to pick up queen bees imported from Hawaii and deliver them across B.C. and Alberta to keep the industry alive. The Gazette couldn’t reach Johnson for an interview.

“I would go as far to say he saved the industry this year,” Olthof said.

Termeer said trying to figure out how to get hive numbers back up and replace bees has been very difficult this year, on top of the potential losses of income that will come with a reduced amount of honey.

Phillips said right now they can only predict the number of hive and bee losses from this season and won’t know final numbers until the end of the summer.

Overall, beekeepers are saying it has been very stressful to deal with COVID-19 and try to keep their businesses going. Phillips said one far northern beekeeper in the province lost 90 per cent of his bees, resulting in a $2-million loss in revenue for honey sales.

Alberta is the largest producer of honey in Canada, and local beekeepers produce 41 million pounds of the stuff annually and contribute $67 million to the economy. There are about 170 beekeepers registered with the Alberta Beekeeping Commission.

This year, the industry expects to lose between 50,000 to 100,000 of those hives, with the lowest loss possible to the industry sitting at $30 million.

Although the money handed out by the province didn’t total the industry’s losses, Phillips said beekeepers were still thankful they were getting support. The provincial government also advocated very hard to try to get the borders open to ship in replacement bees, but weren’t successful.

“I think they did what they felt like they could,” Phillips said.

Jennifer Henderson is the Local Journalism Initiative reporter for Great West Newspapers. Her position is funded by the Government of Canada.