Restoration company had double the calls for service during the cold weather
0
Jan 27, 2020 9:00 AM By: Jennifer Henderson 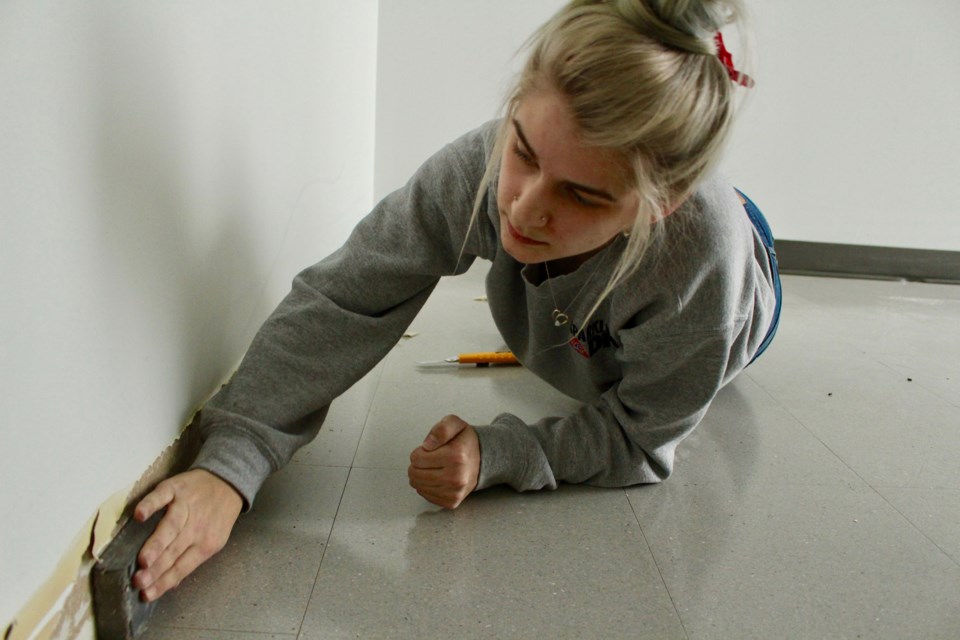 Jessica Currie with Sparklean DKI sands down the baseboards at the St. Albert Gazette to remove the water damage that occurred from a broken pipe during the cold snap. The main floor of the Gazette flooded early Sunday morning but the water caused no major interruption to services. JENNIFER HENDERSON/St. Albert Gazette

One St. Albert restoration company saw their calls for service double thanks to the cold snap this month.

During the week-long blast of icy weather that took temperatures down below -40 C with wind chill, DKI Sparklean received more calls in that one week than they usually do in a month.

Mike Howes, owner of the restoration company, said they received more than a dozen calls for help during the week, while they typically receive six during a normal month in the winter. Usually, the calls are for burst pipes.

It was a busy time of year, but when compared to previous cold snaps, Howes thinks people might be learning to prepare for deep freezes.

“I don't know if Edmontonians are really starting to button down the places and keep them warm or what,” he said.

Temperature isn’t the only contributor to burst pipes. Howes said one of the reasons pipes burst in the winter is the wind.

Last year during the long deep freeze the region had in February, Howes' company received around 80 calls for service and were working nearly around the clock to clean up from burst pipes and other cold weather problems.

Howes said that last February, one of the major contributing factors to their spike in business was the wind that came with the cold.

“Buildings crack and shift over time,” he said, and when it gets cold the wind can blow into the small spaces and wreak havoc.

One of the notable cases Howes handled last week was at the St. Albert Gazette office in Campbell Business Park after a pipe burst early Sunday morning, flooding the entire main floor of the building.

Howes and his crew also cleaned up a vacant condo unit that had the heat go out, causing a pipe to burst and send water throughout the condo. The water froze and turned the entire unit into an ice box.

“As soon as it starts freezing, the pipes start bursting and the water is still on and they are running until they freeze solid,” Howes said.

The restoration expert said the best way to avoid burst pipes is to turn your main water line off if you are going to be away for more than 24 hours or if the home is vacant.

“So if there's something that does happen to your furnace and it goes down, you don't have the flooding. You have some repairs to do with some frozen pipes but at least your house will be intact,” Howes said.

Howes said if pipes do burst, it's best to call for help immediately and start drying out the area.

“As long as you can dry it in three or four days, you're not going to get any mould growing, which is the big concern. A lot of time people don’t find it for a day or two,” Howes said.

If water from burst pipes sits too long, all of the drywall would have to be replaced, but if you can dry it out quickly enough you may be able to avoid major repair work.

Despite the spike in calls for service for Howes and his company, City of St. Albert media spokesperson Cory Sinclair said they had no major structure fires to report during the cold weather.