St. Albertans won’t be able to recycle their glass jars or to-go cups any more once city council rubber-stamps changes to the city’s recycling program.
Sep 11, 2018 12:00 AM By: April Hudson 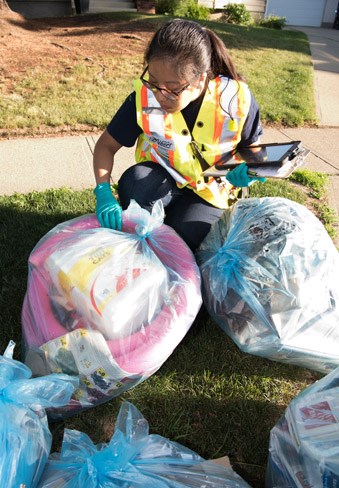 The people of St. Albert are starting to realize that putting their blue bags on the curb doesn’t automatically mean the recyclables are being disposed of responsibly, Mayor Cathy Heron says.

St. Albertans won’t be able to recycle their glass jars or to-go cups any more once city council rubber-stamps changes to the city’s recycling program.

Those items, along with plastic clamshell containers and single-serve plastic yogurt, pudding and sauce cups, are among the materials that will soon need to be thrown in the trash instead.

City councillors heard Monday during their governance, priorities and finance committee meeting that global markets for recyclables – particularly in China – are changing, and St. Albert needs to change as well.

“This is not just a problem for St. Albert but municipalities all across North America,” said Olivia Kwok, the city’s supervisor for waste and diversion programs.

“The reason why these items are being removed from our acceptables list is that there is no longer a market for these items to be made into something new.”

She also pointed to how heavily contaminated the specified items often are with food product, which can render other recyclables useless as well.

“Right now, we’ve estimated the price of this increase in cost at around 55 cents per month, and this is just strictly related to this blue bag program,” he said.

Mayor Cathy Heron said people are starting to realize that putting their blue bags on the curb doesn’t automatically mean the recyclables are being disposed of responsibly.

“Today, we are finding out ... that we have to be more responsible and take care of our own waste,” she said.

Referencing a discussion about recycling changes that she started on her Facebook page, Heron added it’s important everyone begin to take responsibility for their waste.

“Residents of St. Albert are not happy, and I get it. And the blame is everywhere,” she said.

“I really think we all need to look in the mirror and see that we all share in the culpability here – from every resident to industry to government, to the countries that are involved with it.”

Councillors are awaiting a report, due in early 2019, which will include an initial engineering design for a zero-waste facility in or next to Lakeview Business District.

Coun. Wes Brodhead said Monday while he finds the immediate situation demoralizing, he sees hope for the future in zero-waste.

“I'm looking forward to the day when our municipal waste is actually viewed as an asset of our community, and we will look at it as something we want to process on our own simply because of the value it brings to us,” he said.

Changes to St. Albert’s residential solid waste bylaw will come forward to council in the coming months for a final vote.