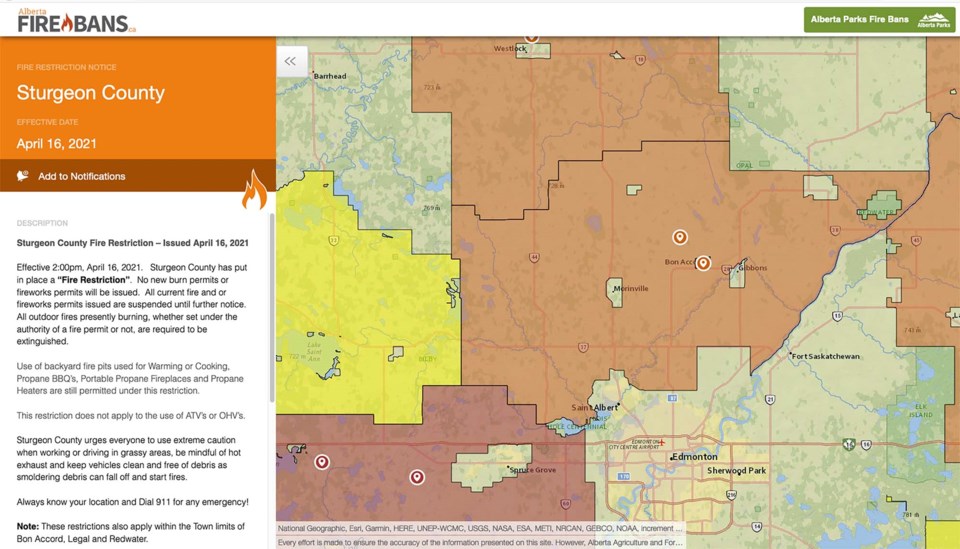 NO FIREWORKS — Sturgeon County issued a fire restriction on April 16 at 3 p.m. All fire permits were suspended, meaning burn barrels and fireworks were no longer allowed. ALBERTA FIRE BANS/Photo

UPDATE: This story was updated April 19, 2021, with additional information from Alberta Wildfire and various municipalities.

Sturgeon County residents should put away their fireworks this week now that the county’s fire chief has clamped down on outdoor fires.

Sturgeon County fire chief Pat Mahoney issued a fire restriction for the county, Bon Accord, Legal, and Redwater at 3 p.m. April 16. The restriction did not extend to Gibbons and Morinville, whose departments make their own decisions on fire limitations.

Mahoney said his crews responded to four small fires between April 14 and 16, which was about average for this time of year. Still, the dry spring and fast melt has made for some flammable conditions in the county, so he was bringing in this restriction to reduce the fire risk.

Mahoney said the fire restriction meant that all outdoor fire permits for fireworks, burn barrels, and other regulated activities were suspended and that no new fire permits would be issued. Any active outdoor fires were to be extinguished immediately. Backyard barbecues, approved fire pits, and off-road vehicles were not restricted.

“We’re asking everyone to use caution when driving in grassy areas or working in dry areas,” Mahoney said, as hot sparks and exhaust could spark a fire.

Mahoney said this restriction would likely remain in place until at least late May due to current weather conditions. He did not believe it would escalate into a fire ban, which would ban all outdoor fires.

Mahoney advised anyone who spotted smoke or fire in Sturgeon County to call 911.

On April 16, the Alberta Climate Information Service (ACIS) reported that Sturgeon County and pretty much all of northern, central, and southern Alberta was at “extreme” risk of fire in terms of fine fuel moisture content (a measure of how dry and flammable surface vegetation was in an area).

Fire risk was elevated across much of Alberta prior to April 16 due to dry conditions, said Alberta Wildfire information officer Melissa Story. That risk dropped significantly over the weekend after snow and rain quenched most of the province, with ACIS reporting most of the province to be at low risk for fire on April 18.

Story said Alberta had experienced more wildfires than average since the start of fire season on March 1 (105 vs. 85), but that those fires had consumed fewer hectares (105 vs. 178).

Sturgeon County was one of a number of Edmonton-area communities that clamped down on fires in mid-April due to dry conditions, including Parkland County (fire ban); Edmonton and the counties of Barrhead, Lamont, Thorhild, and Westlock (fire restrictions), and Lac Ste. Anne County (fire advisory/ban on new fire permits).

Gibbons did not have a fire restriction in place as of April 19 as the town already banned fireworks and all fires outside of approved fire pits at any time of year, said fire chief Eric Lowe. He was monitoring field conditions and would implement a total fire ban if needed.

Morinville fire chief Brad Boddez said April 19 that he would not bring in a fire ban or restriction due to last weekend’s rains. He asked residents to follow the town’s rules for safe use of their fire pits.

City of St. Albert spokesperson Cory Sinclair said in an email April 17 that St. Albert Fire had no plans for a fire ban or restriction but was monitoring conditions.

Visit albertafirebans.ca for the latest on fire restrictions in Alberta.

Episode 9: “Unreal” demand for bicycles as riders hit the trails
Good Morning, St. Albert!
Gardening could be the hobby you've been looking for
Online map a self-guided tour of Sturgeon County greenhouses