When Ford announced several months ago that it would be introducing a tiny 1.0-litre three-cylinder engine in the Fiesta, I was skeptical.
0
Jul 23, 2014 12:00 AM By: Garry Melnyk 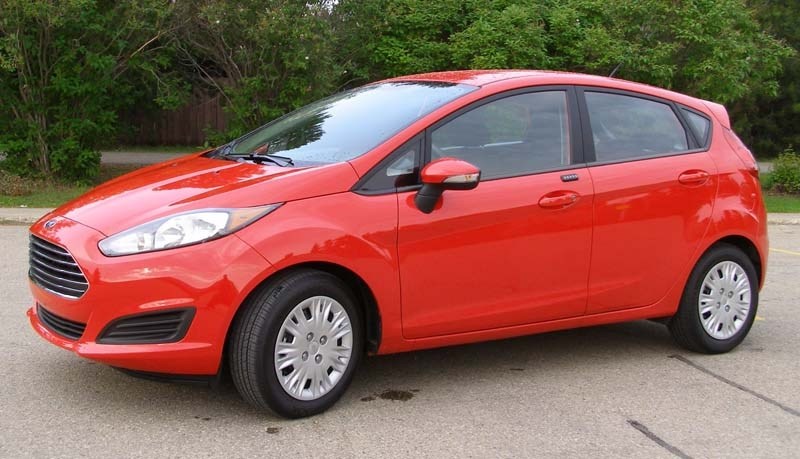 BASIC CAR – The new Ford Fiesta is a good commuter car but is lacking some key features that would widen its appeal.

When Ford announced several months ago that it would be introducing a tiny 1.0-litre three-cylinder engine in the Fiesta, I was skeptical.

Having driven a Fiat Panda rental car in Europe a few years back, with such a small engine I knew that it was a gamble in the North American market. A one-litre powerplant in even a small car gives very little power for everyday driving, especially at highway speed.

But hold on, Ford's new engine for 2014 gives more horsepower, torque and fuel efficiency than the Fiesta's standard 1.6-litre four-cylinder engine. That’s 123 horsepower compared to 120 for the 1.6 engine. The three-cylinder is turbocharged (that's why the term EcoBoost) and that's why it has a little more punch than the larger engine.

The combined city/highway fuel consumption of the Fiesta with the 1.0L EcoBoost engine is said to be 14 per cent better than the Fiesta with the 1.6-litre engine. In combined driving between St. Albert and Edmonton including the Anthony Henday, I was able to achieve 6.7 L/100km (41 mpg) – not bad, although I expected better. I was not able to make any long highway trips to determine how fuel efficient the car is on the open road.

Unfortunately the 1.0-litre EcoBoost engine is only available as an option on the Fiesta’s SE trim level. The SE starts at $16,675 with the $1,295 price of the 1.0L EcoBoost package (which includes the engine, 15-inch tires and steel wheels with hubcaps, EcoBoost badge and rear spoiler on sedan) pushing the price tag to $17,970. That’s before GST and the $100 air conditioning tax.

I should also mention at this point the Fiesta SE 1.0L EcoBoost engine is only available with a five-speed manual transmission. So if you don't know how to row gears, then you might want to learn – or not. Fewer people these days know how to drive a manual transmission so I imagine there will be prospective buyers walking away from this car once they hear an auto stick is not available.

The five-speed manual transmission is a little notchy with long throws. Not what I was expecting in a modern car, but I soon got used to it. Clutch pedal effort is light and once you get going the Fiesta seems quick. The Fiesta’s little engine has a wide torque band and revs easily to 3,000-rpm, at which point I would usually make a shift. With most small engines, reaching that rpm results in some unpleasant sounds. To my surprise, instead there is a subdued rumble. On the highway, even at 110 kilometres per hour and 2500 rpm, the Fiesta is very quiet inside. There is plenty of torque and no turbo lag.

The Fiesta’s electric power rack-and-pinion steering is reasonably quick with light steering effort for easy parking. The Fiesta’s independent front McPherson struts and a rear twist beam with coil springs provides nimble handling even with the 15-inch tires. They are not a performance tire and the car sits high, resulting in some body lean, but that’s to be expected as, after all, this is not a performance car.

In front of the driver is basic instrumentation, a speedometer and tachometer with a small LCD computer between them. In the centre of the instrument panel is a radio and heater controls.

The LCD screen at the top is a little small to read but it’s well shielded to prevent glare. A large round knob selects different functions on the screen, such as radio, phone, media, sound, and menu. Ford’s SYNC is included and provides voice-activated phone calls, incoming text messages read to you by a female voice and wireless Bluetooth audio streaming from your smartphone.

Unfortunately MyFord Touch and Sirius satellite radio is not available in Fiestas with the 1.0L EcoBoost engine.

The standard 60/40 split folding rear seatbacks fold down to increase cargo space, but they don’t fold flat which can be annoying depending on the extra cargo you are carrying. The black interior is boring and hot on a summer day. I can accept hot; I’m growing very tired with all-black interiors. Come on Ford, put more colour into black, blah interiors.

My test car had heated front seats, automatic temperature control and heated mirrors, as part of the optional comfort package for $500. A key fob for remote entry is a $125 option which my Fiesta had. So the final tally on my hatchback was $20,260, including shipping – a little high for a basic little car in my opinion.

However, if that is all some people want then the little Fiesta is a great, basic commuter car. It would also be ideal for the young person who has completed their post-secondary education and wants something reliable and economical backed up by a good warranty.

The Fiesta SE 1.0L is a good start but certainly needs an automatic transmission option to broaden its appeal. Some nicer wheels for a little bling would be a good idea too.

Garry Melnyk is a St. Albert resident and lifelong car buff who has written about new cars and trucks for radio and print publications since the ’70s. Read Garry's blog at www.stalbertgazette.com.