Learning in the loo 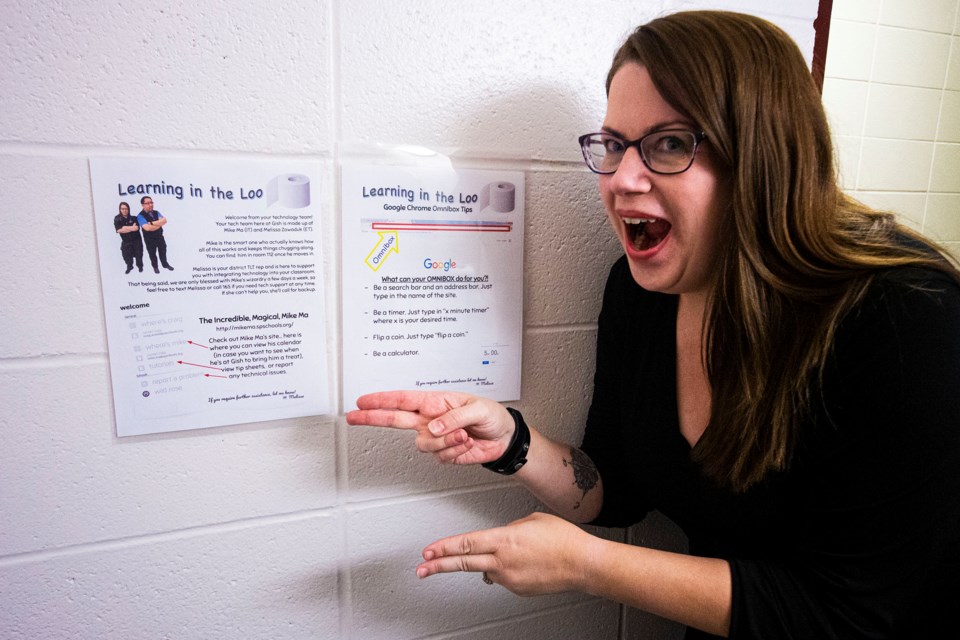 Melissa Zawaduk, a Grade 3 teacher and staff technology specialist at Elmer Gish school who uses innovative ways to help fellow teachers integrate technology into their classrooms. Instead of relying on email to engage staff, Zawaduk posts helpful informational posters in places like the the staff washroom.

Sometimes the best way to get your message across to someone is to catch them with their pants down.

That’s the theory behind Melissa Zawaduk’s latest educational gambit, anyway. The info-tech whiz rolled out an unusual plan this term to try and teach teachers about technology while they were taking a, well, whiz.

A 13-year veteran at Elmer S. Gish, Zawaduk has gained a reputation as the school’s go-to gal for all questions tech-related.

“I consider myself the ‘E.T.’ and (school computer technician) Mike Ma the I.T.,” she said – you go to him if something’s broken, and to Zawaduk if you want to do something new with computers or gadgets in your classroom.

Still, Zawaduk said she noticed many staff members kept asking her questions that she’d already answered in the videos and emails she sent out every week. This summer, she read on Twitter about how some teachers had done “Potty PD” or “Technology While You Tinkle” by posting technology tips in the bathroom, and decided to try it herself.

She’s since printed off a series of tip sheets she’s now posting in the staff bathroom at Gish as part of what she calls Learning in the Loo.

“When they’re sitting there, they’re a captive audience,” she explained, so she hopes her fellow teachers will get the message.

The posters include QR codes to useful websites and a list of materials teachers can grab from the school’s Coding Club. They do not include her phone number, as she said she felt weird about putting her phone number up on a bathroom wall.

“Oh my gosh, it’s hilarious,” Gish assistant principal Krysta Wilson said of the posters, which have proved popular among staffers.

Zawaduk said she hopes to post new tips in the bathroom every week.

“I kind of joke that I’m the geekiest teacher on staff,” she said.

Zawaduk said she’s always had an affinity for computers since she was a kid, having grown up playing on a Commodore Vic 20 as an elementary student. When her classmates were struggling through their first encounter with Macintosh computers in university, she ended up coaching them through it.

“It just made sense to me.”

Zawaduk said she started giving computer-related tips to staffers back at Robert Rundle and was asked to do so in an official capacity when she came to Gish as the school’s representative on the St. Albert Public board’s technology committee (a group of teachers who work to disseminate information technology ideas throughout the district).

Technology evolves so fast that it can be tough for teachers to keep up, especially when their students come to class well versed in the latest social media trends, Wilson said. Zawaduk is always keeping up to date on new apps and devices, and helps her fellow staff members stay up to speed.

“Her enthusiasm for it is infectious,” Wilson said, and that encourages tech-leery teachers to approach her for help and try out new tools in their classrooms.

Zawaduk is also a phenomenal baker and frequently brings in treats for staff, even during the summer, Wilson added.

“She’s always thinking about other people before herself.”

Technology scares a lot of people because they don’t believe they can use it, Zawaduk said. Her job is to show them how and get them excited about what it could do for their students.

“(Technology) is not for young people. It’s for everyone.”