What better way to start the summer than behind the wheel of a new soul red metallic Mazda MX-5 sports car? And thank you Mazda for making it sound like a sports car.
0
Jul 26, 2017 12:00 AM By: Garry Melnyk 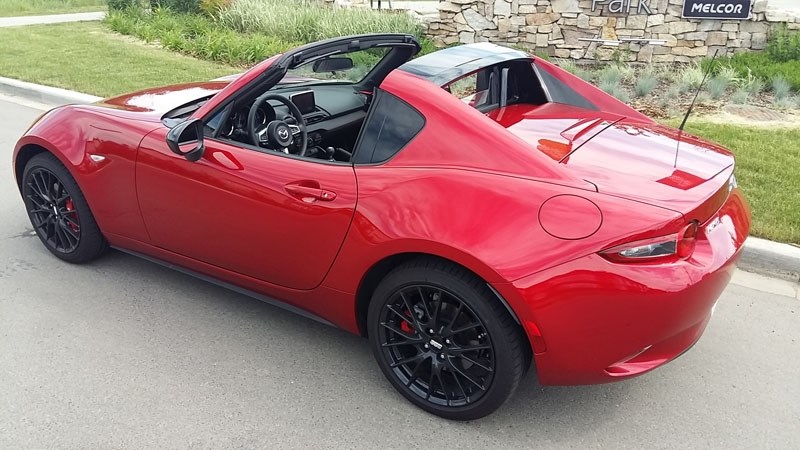 What better way to start the summer than behind the wheel of a new soul red metallic Mazda MX-5 sports car? And thank you Mazda for making it sound like a sports car.

The 2017 MX-5 is the fourth generation of a little sports car that has been a huge success throughout the world. Introduced in the summer of 1989 as a 1990 model the Miata looked somewhat like an early '60s Lotus Elan and had a base price of $13,800. But though it was a sensation, it wasn't particularly quick or fast but I remember very well the smile it put on my face as I enjoyed the roadster top-down one summer day.

Though the Miata was developed in America and Japan, it has been a huge success throughout the world too. With its tidy size, clean lines, simple drivetrain, outstanding handling and unpretentious character, the Miata maintains far-reaching appeal. There are Miata clubs in New Zealand, where there are more sheep than people; in England, where this sort of car was invented and in Sweden, where it's way too cold to drive with the top down most of the year. The Miata was, and continues to be, a phenomenon.

The Miata deserves credit not only for reviving a dormant passion for roadsters, but for emboldening other manufacturers to pursue what at first seem to be whimsical ideas – and turn out to be good business. Think Viper or Ford GT.

There are two models of MX-5; a Soft Top starting at $31,900 or the Retractable Fastback at $38,800. The latter is the one I enjoyed for a week and probably the model that will have the most appeal as you feel secure inside the cabin, yet still have a sense of open-top freedom. The completely new electric roof has three separate sections, including front roof, middle roof and rear section. The rear glass window retracts when the top is lowered and you can do this travelling at 10 km/ph or less, which is handy in situations of sudden rainfall like the storms, which blew in at the end of June.

While the MX-5 RF feels almost like a basic little sports car you are pampered with supple textured Nappa leather and a 4.6” multi-information colour display gauge cluster and a centre NAV screen.

You will get some wind noise whether the top is open or closed but a new transparent wind blocker has been developed to reduce that noise and help improve rear visibility. With the windows up and insulated hardtop in place, the cabin can be very quiet especially on smooth pavement.

The 2.0 litre 4 cylinder engine puts out 155 horsepower which might not seem like a lot but remember the MX-5 in soft top configuration only weights 1,234 kg. The smooth little engine likes to rev and snapping shifts with the 6-speed manual gearbox a breeze with each gear precise and a linkage that feels direct and strong – not rubbery. An automatic is available but for those of us who really like to be engaged, the total experience of a smooth, powerful engine assisted by a clean shifting transmission and grippy suspension in such a small package is like no other sports car.

A wide stance and specially tuned suspension combined with electric power steering preserves the lightweight driving characteristics of the MX-5. However, and especially on smooth pavement (if you can find it) there is a high quality of ride comfort and composure. On a summer day with no wind and a smooth highway the MX-5 will make you happy.

While I might say this is a car for the young and young-at-heart, getting in can be like an astronaut squeezing through the open hatch of a Mercury space capsule. No problem for a young man or woman, but a little tight on the old back muscles for us old guys.

Once in, all your controls are close at hand, the seats are well bolstered with a snug and secure feel to hold you in place no matter how tight the turn. There is plenty of legroom for six footers like me. Your right hand falls very close to the gear shifter and before you head out, the top can be retracted in mere seconds so you’re quickly on your way.

An overnight trip means you take a minimum of possessions and little clothing in a very little suitcase because the trunk is very, very small. Storage space inside the passenger cabin is minimal too. A cubby on the back bulkhead between the seats has enough space for your sunglasses, the pink card and registration and not much else. Not a car for a long highway trip unless said trip is a solo affair. At least then the passenger seat will provide additional cargo capacity. Yes, there are cupholders, located between the seats. I wouldn’t put any hot drinks in them. That might be a bit risky if driver and passenger elbows make a wrong move.

But why would you waste time sipping your latte in an MX-5 anyway? This is a real sports car for real drivers and this is the best time of year to enjoy one.