St. Albert could grow by the size of two Morinvilles by the end of this decade under the terms of a proposed annexation agreement with Sturgeon County. St.
0
Feb 28, 2017 11:00 PM By: Kevin Ma 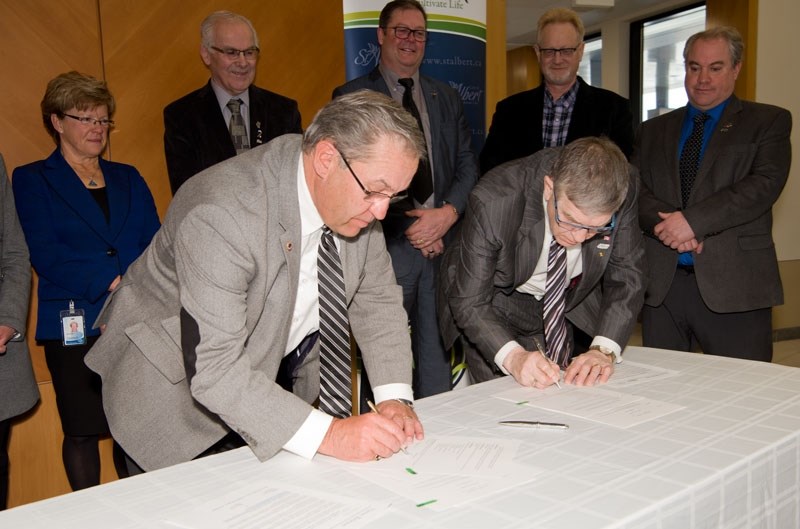 St. Albert could grow by the size of two Morinvilles by the end of this decade under the terms of a proposed annexation agreement with Sturgeon County.

Crouse said this deal was the result of about three-and-a-half years of talks between the two governments that started with an agreement he and Flynn made in 2013 to work together.

The agreement sets out the potential maximum amount of land that the city could annex from the county – some 19.8 square kilometres, reports county community and regional planning manager Collin Steffes, which is about twice the size of Morinville. This would cause a 41 per cent jump in St. Albert's area if it were all annexed.

The agreement commits both governments to creating a joint committee to determine which of these lands will be annexed. That committee also will set out how St. Albert will support development of a land use plan for the Sturgeon Valley, discuss joint-servicing options outside of the annexed area, and create plans for transition zones between the city and the county.

This annexation will help the city plan the next 50 years of growth and allow the city and the county to plan economic development together, Crouse said.

"We're really setting up 10 councils to not have to worry about this stuff."

This co-operative approach will save both councils a lot of time and money compared to the more adversarial annexations happening elsewhere in the capital region, Flynn said. He hoped it would serve as a model for the region on how co-operation can lead to mutual benefit.

"It's learning to think different."

Lands on the table

Steffes said the agreement covers roughly 1,980 hectares of land to the north, east and west of St. Albert, much of which is farmland. It excludes the Pro North Industrial Park, as the county has plans for that region, but includes the Northern Lights neighbourhood, which would work better as part of St. Albert should it grow.

The area to the northeast was included in the proposed annexation as it would be very tough for the county to service it, Steffes said. Several landowners in this region have also expressed interest in being serviced to an urban standard.

The agreement includes Riverlot 56, meaning it could become part of St. Albert. This region is primarily used by St. Albert residents anyway, and would make a great city/county transition zone, Flynn said. This part of the border also follows the realigned 127th St., which St. Albert might be best suited to pay for, Crouse added.

The agreement states that St. Albert shall shield any lands it annexes from tax hikes for a certain time and shall bear the full cost to service them unless it works out a side-deal with the county. St. Albert also agrees not to annex more land from the county unless certain conditions (such as a time period) are met.

Crouse said St. Albert would file an official letter of intent to annex with the province in a few months. Negotiations will likely take a few years – a sharp contrast to the 10 years the city spent on its last, much-less-amicable annexation deal with Sturgeon County. St. Albert will foot the bill for the various studies that the annexation requires, and will likely allocate about $1 million for that purpose in a few weeks.

There have been many times in recent years where local governments and the region haven't come together, Crouse said, citing the Capital Region Board's failure to support Edmonton's bid to ask the province to support its new downtown arena.

"I think we need to continue into the decades ahead, years ahead, hours ahead to find ways to help each other rather than divide each other."

Details of the agreement are available at stalbert.ca/cosa/leadership/boundary-adjustment and on the Sturgeon County website.