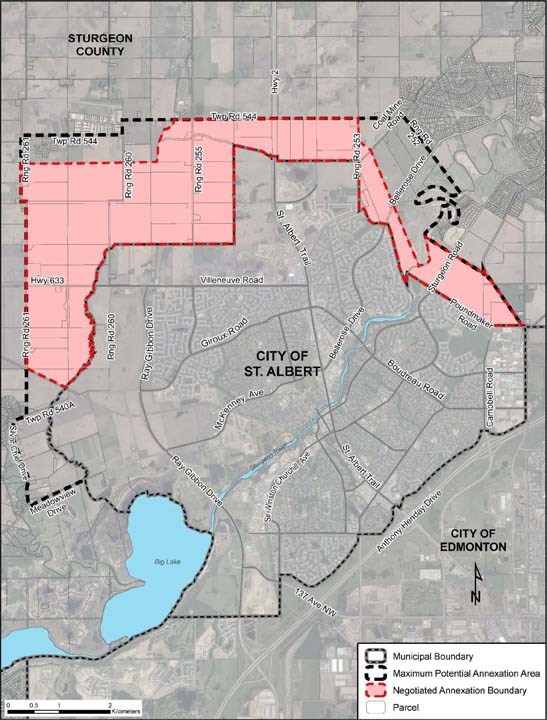 WELCOME TO ST. ALBERT – St. Albert and Sturgeon County officials finalized an annexation agreement this week that would see some 1,500 hectares of land (shown in red) added to the city's boundaries. The annexation, if approved by the province, would take effect Jan. 1, 2022. CITY OF ST. ALBERT/Photo

St. Albert is set to get a whole lot bigger now that city council has signed off on a deal to annex 1,500 hectares from Sturgeon County.

The agreement, if approved by the provincial government, would transfer some 1,500 hectares (about 1.4 Morinvilles) to St. Albert from Sturgeon County.

St. Albert started these talks back in 2017 because the city was short on developable land, Mayor Cathy Heron said in an interview. This deal gives the city 45 years of growing room and should help future councils expand the city’s non-residential tax base.

Sturgeon County Mayor Alanna Hnatiw said she was pleased the county and the city reached an agreement, but added she would prefer to see an end to these large annexations.

“All municipalities have a right to grow, but there do have to be some limits and balances between urban and rural municipalities,” she said, noting the Edmonton Metropolitan Region Board’s agricultural master plan may help here.

Sturgeon County Coun. Wayne Bokenfohr thanked all members of the negotiations for their work.

“It just goes to show that regional collaboration is alive and well.”

The annexation agreement specified which lands and roads are to be transferred to St. Albert and what would happen to the county residents that live in the area.

Under the deal, about 1,558 hectares of land along St. Albert’s current northern border and parts of 10 roads would flip from county to city control. St. Albert senior planner Vicki Dodge said the city would have to maintain those roads to at least county standards and could decide when they want to upgrade them to urban levels.

St. Albert agreed to pay the county $600,000 as compensation for the tax revenue lost through the annexation.

The deal specified that residents in the annexed area would be taxed at county rates (or St. Albert rates, if those were lower) for the next 45 years, but would switch to city rates if they rezone their land, subdivide it into more than four lots or tie it to St. Albert water or sewer services. They would also pay city rates once the annexed area is fully developed to urban standards.

Residents in the annexed zone would also get to keep certain rights they currently have in the county, such as the right to ride snowmobiles, Heron said. These rights would be outlined in a transition plan that covers about 30 areas, including fireworks, firearms, fire pits and weed control.

The deal states St. Albert would not make any further annexation requests of the county unless it has less than 20 years of land available, or 15 if the two governments have an intermunicipal development plan (IDP) in place.

Sturgeon County and St. Albert’s last IDP (which regulates development along a shared border) effectively ended when the county withdrew from it in 2010.

But Heron said the city and the county have agreed to write a new IDP as a result of the annexation talks. Negotiators kept discussing transportation networks, recreation and other issues unrelated to annexation during the talks, she explained, and realized those issues were a perfect fit for an IDP.

Heron said it would be up to the next council to write this new IDP.

Dodge said the city would hold three online open houses about the annexation deal in mid-October before sending it to the province's Municipal Government Board for approval in late November.

Heron said she hopes to hear back from the board prior to the 2021 municipal election and to have the annexation completed by Jan. 1, 2022. It would be up to the next council to figure out how to use the annexed land.

Heron thanked the negotiating team for helping to shape a new, positive relationship between the city and the county.

“For those new residents from the county, welcome to St. Albert.”