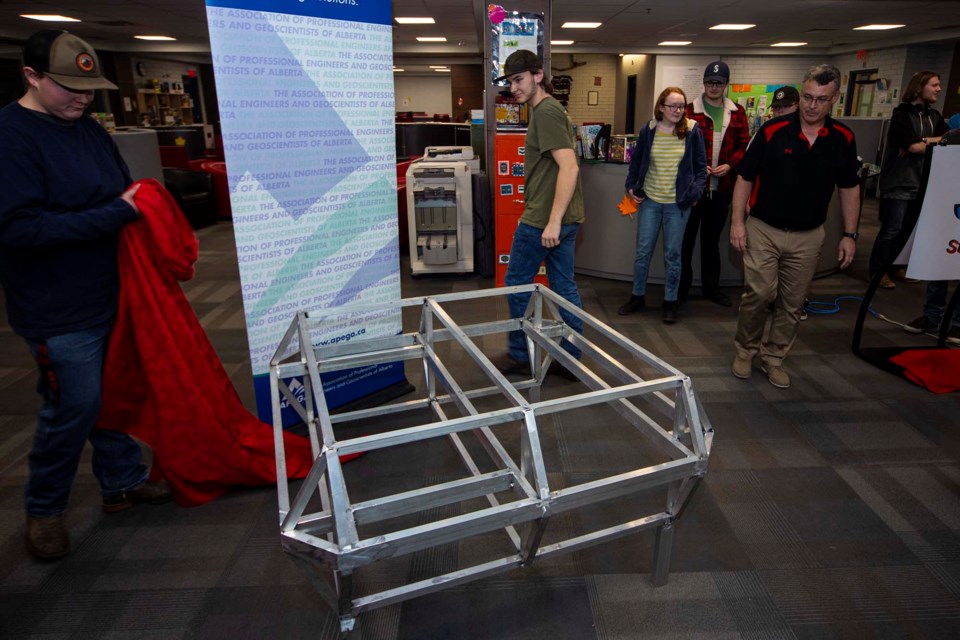 The Sturgeon Composite Robotics Club unveils the frame for its autonomous biohazard collecting robot, which is being built by student volunteers this year. Backed by a $5,000 grant from APEGA, the students hope to use their computer and engineering skills to build a robot that can collect hazardous waste from cities.

Now, it’s got a body, sonar, lidar, and a face-tracking camera, as well as a name.

The Robotics Club showcased progress on their trash-collecting robot project during parent-teacher interviews night last Nov. 6 at Sturgeon Composite. They unveiled the robot’s table-sized aluminium frame, showcased its sensors, and revealed its name: Spirit Rover, a reference to the school’s sport’s team and NASA’s Spirit rover, which inspired the design for its suspension system.

The club has embarked on an ambitious project to build – in just one year – an autonomous machine that can detect and collect syringes and other hazardous objects from city parks and alleys.

Teacher Kevin Hubick presented the project to his computing science students last year as a “moon-shot” challenge to inspire them to become problem-solvers.

Now, backed by a $5,000 grant from APEGA, club members have spent two months figuring out how to program the robot’s sensors, wire its circuit, and design its suspension systems, all with only a little bit of help from their teachers.

Club member Shea Mullins explained that the finished robot would use sensors to map its environment, detect target objects such as syringes, drive to those objects and pick them up with a mechanical claw. He was part of the team that reverse-engineered the claw (they didn’t have a manual). Using several microcontrollers, they’ve programmed it to pick up and retrieve a syringe and put it in a box.

“I really love making stuff,” Mullins said, when asked why he’s spent so much time on this project, and he’s learned a lot about robotics and coding in the process.

“I really like being responsible for making something that in the future could be really big.”

Kurt Van de Cappelle helped weld the robot’s frame and prototype wheel axles. He said the finished robot would have six independently controlled wheels, each powered by winch motors that can crank out 2,000 pounds of force.

“It’s not going to stall out,” he said, and it should be able to power through any obstacle it encounters.

Club members showed open house guests working models of the lidar and sonar sensors they planned to mount to the robot, as well as the face-tracking camera that, once they feed thousands of pictures into it, will be able to recognize and track syringes and other target objects.

Mullins noted the club had an amusing glitch with that camera at first that caused it to immediately look away whenever it spotted a face.

“It was literally like a child hiding its face from its parents when they were scolding them,” he said.

Hubick said he was amazed by the enthusiasm students had shown for this project – the club officially meets once a week, but members regularly work on the robot during lunch hours and after school. Some recently worked on it until 7 p.m. despite having the next day off, with club member Brody Lebid saying it was “the perfect way to start a long weekend.”

“I just love robots and anything mechanical and anything that moves,” Lebid explained, when asked about that remark. He said the club had taught him a lot about problem solving, as you had to figure out most of the solutions yourself.

“And it’s just a fun environment to be in, just constantly solving problems. You feel so accomplished every time you finish something you’ve been struggling with.”

Hubick said the club was so gung-ho about the robot that they are now about six weeks ahead of schedule and could have the robot rolling down the school’s halls in six weeks.

“This is exactly what public education should be: it’s engaging, it’s empowering, it’s collaborative,” Hubick said.

“It takes the theory out of the classroom and puts it into the real world.”