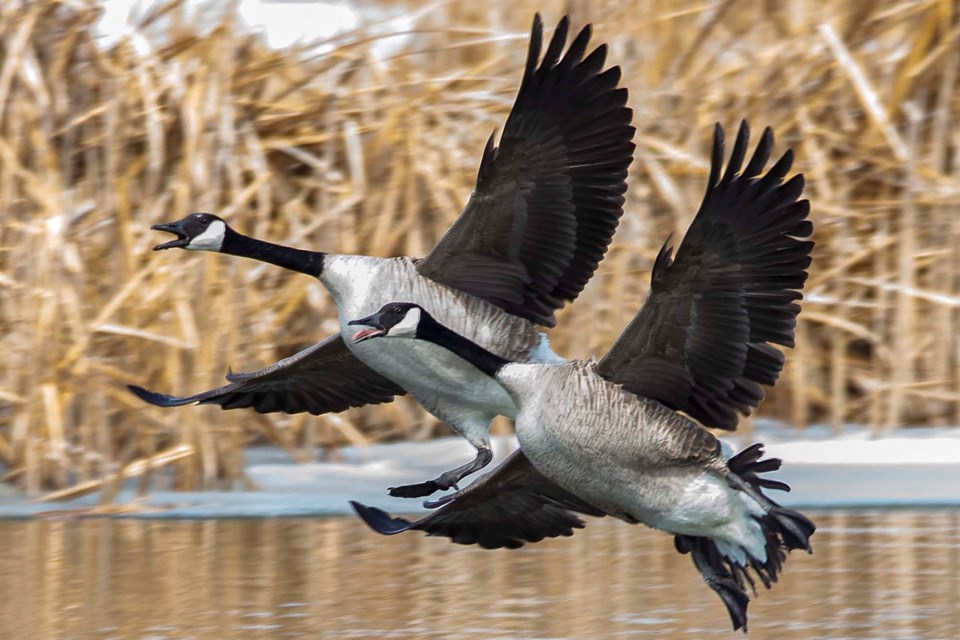 BACK IN TOWN — A pair of Canada geese come in for a landing on a stretch of open water along the Sturgeon River Wednesday morning. Canada geese are just some of the many migratory birds returning to St. Albert this spring. CHRIS COLBOURNE/St. Albert Gazette

Springing to Life may be cancelled due to COVID-19, but St Albert-area birders say there’s still a bevy of birds headed our way.

St. Albert birder Dan Stoker confirmed this week that the annual Springing to Life springtime bird count is cancelled this year as the province has banned large public gatherings to counter the spread of the novel coronavirus. The event typically happens around this time of year at the Big Lake Environment Support Society platform (which the city has also closed on account of the coronavirus) to celebrate spring.

Birders can still count birds on their own, though, and Stoker said he and a few helpers will conduct a mini-count this month to keep Springing to Life records going.

April is an exciting time of year for birders as there are all sorts of species moving through town, Stoker said. Two unusual ones recently spotted near Edmonton’s Quesnell Bridge were Barrow’s goldeneyes and wood ducks – both rare visitors from B.C. The former is a goldeneye with a white teardrop by its eye instead of a circle, while the latter is unmistakable for its beautiful colours and green crest.

“It’s when these unusual birds pass through.”

Birder Alan Hingston said the first migratory birds to return to St. Albert are American crows, which typically mob and chase out the ravens on arrival. Crows showed up here at the end of March, with Canada geese and seagulls returning soon after.

University of Alberta biologist John “the Nature Nut” Acorn said these species show up here first as they’re cold-tolerant and often don’t fly very far in the winter – some hang out in Wabamun or Calgary, Stoker noted.

Stoker said there were already several thousand California gulls around the Roseridge landfill, and a fair number of Canada geese scouting out nesting spots in St. Albert. Many of the latter may be seen scavenging farmers’ fields for food.

“We had thousands of mallards overwinter on the North Saskatchewan,” Stoker said, and they’re now starting to disperse to St. Albert.

American robins were spotted in Calgary as of last week, while rough-legged and red-tailed hawks have been seen in other regions, said Beaverhill Bird Observatory biologist Sara Pearce Meijerink.

“As the snow melts, we should see more and more (birds), which is really exciting.”

Birds coming back now will be in their full breeding plumage and may be engaged in mating behaviours, Hingston said.

“On a day like today, the colours are quite spectacular.”

Drop by the BLESS platform, and you might see male goldeneyes courting the ladies by tossing their heads back to point their beaks skyward, Hingston said. Downy woodpeckers will be drumming logs to demark territory, and chickadees will be singing their typical two-note “fee-bee” song.

Expect to see ravens bobbing their heads, carrying sticks and making strange noises in their quest for mates now, Acorn said. House finches and dark-eye juncos will be singing, and should be joined by robins any day now. Great horned owls may already be on nests, and are likely now busy feeding their babies.

Hingston said the BLESS platform, Red Willow Trail and Braeside Ravine are all great places to go birding this spring. The key is to stay still and quiet and let the birds come to you. Use a camera or binoculars, and take notes so you can look up birds in your bird guide at home.

You can help hungry migratory birds by putting up a bird feeder, Pearce Meijerink said. Keep the feeder either directly against or six meters from your window so birds don’t smack into the glass.

“If you have a bird feeder in your backyard, pleas, please, please keep your cat inside,” she added, as cats are notorious bird-killers.