Vital Grandin teacher and students team up to teach coding 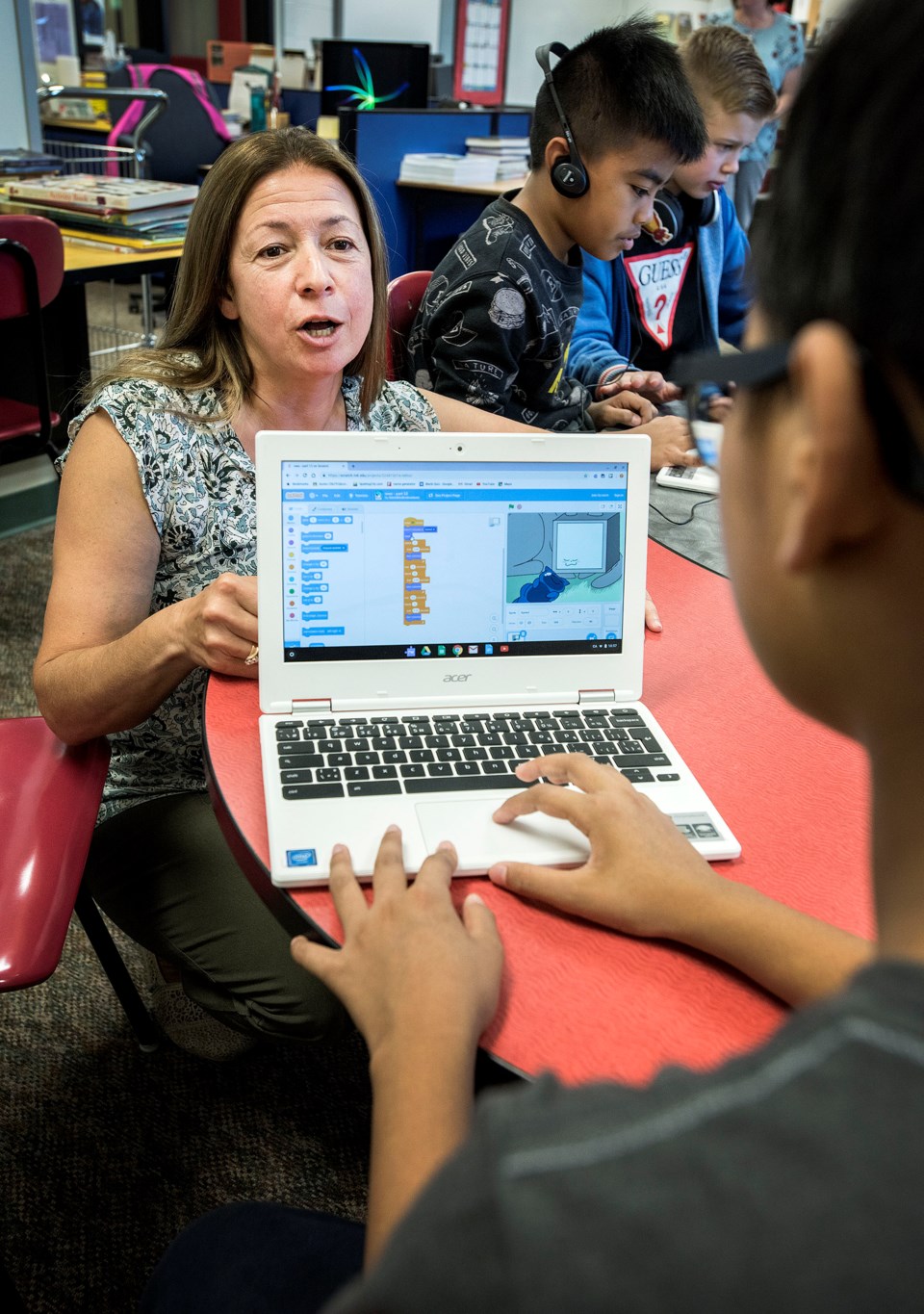 Adriana Bryenton isn’t the only teacher in the Coding class at Vital Grandin Elementary School. In the fast-paced world of computers, her tech-savvy students can teach her – and each other – a thing or two, too.

“Honestly, they know a whole lot more than I do,” she said with a laugh.

“They solve the assignments I give them so quickly.”

Bryenton has led the school’s Coding option and club since they started three years ago. She minored in computers back in university and earned her masters in distance learning, so she said she’s always had an interest in how to bring computers into the classroom. When the school started its options program a few years ago, she suggested a coding class as a way to make use of the school’s many portable computers.

The class is now one of the school’s most popular options, said principal Cheryl LaBuick.

“Technology is not going to go away,” she said, and students will need to know how to write code for many of the jobs of the future.

“She’s so excited to see what they can do and to bring new ideas to our school.”

Bryenton’s students learn to code by practicing with programmable robots such as the ball-like Sphero and three-wheeled Dash and through Scratch, a free online block-based programming language.

Scratch represents chunks of computer commands as blocks students can drag and drop together to create programs, which is easier for youths to understand, Bryenton explains. It also features projects posted by coders from around the world students can mine for inspiration.

Bryenton said each class typically sees her show her students a program in Scratch and task them with making something that meets certain requirements. Students work at their own pace, with many zipping through assignments and moving on to make their own games or interactive stories.

Grade 6 student Gradey Sword has used Scratch to make a game where you move a hungry dinosaur around the screen with the mouse to have it eat eggs for points.

“It’s just fun to see what you can do,” he said of coding, although it was a bit challenging at first.

Coding helps students learn concepts such as variables, coordinates, logic and problem solving, Bryenton said. You can learn about angles by commanding a Sphero, and practice storytelling by coding a joke-telling program.

“They’re not all going to grow up to be game creators, but the way they have to think (here) will really open up new avenues for them.”

Bryenton said there’s definitely a big learning curve when you start to teach coding, and that she has to do a lot of research online. One of her biggest challenges was simply to come up with tasks her students won’t blow through in 10 minutes – some of them have already moved past block coding into formal programming languages.

“What’s really cool about our class is how our kids all help each other,” she said, with students freely sharing tips on how to overcome different coding challenges. Sometimes she’ll be stumped herself, which is when she calls on the class’s more advanced coders to help their peers out.

“They’ll just stop what they’re doing and run over to the other kid and help them out. It’s just beautiful to see.”