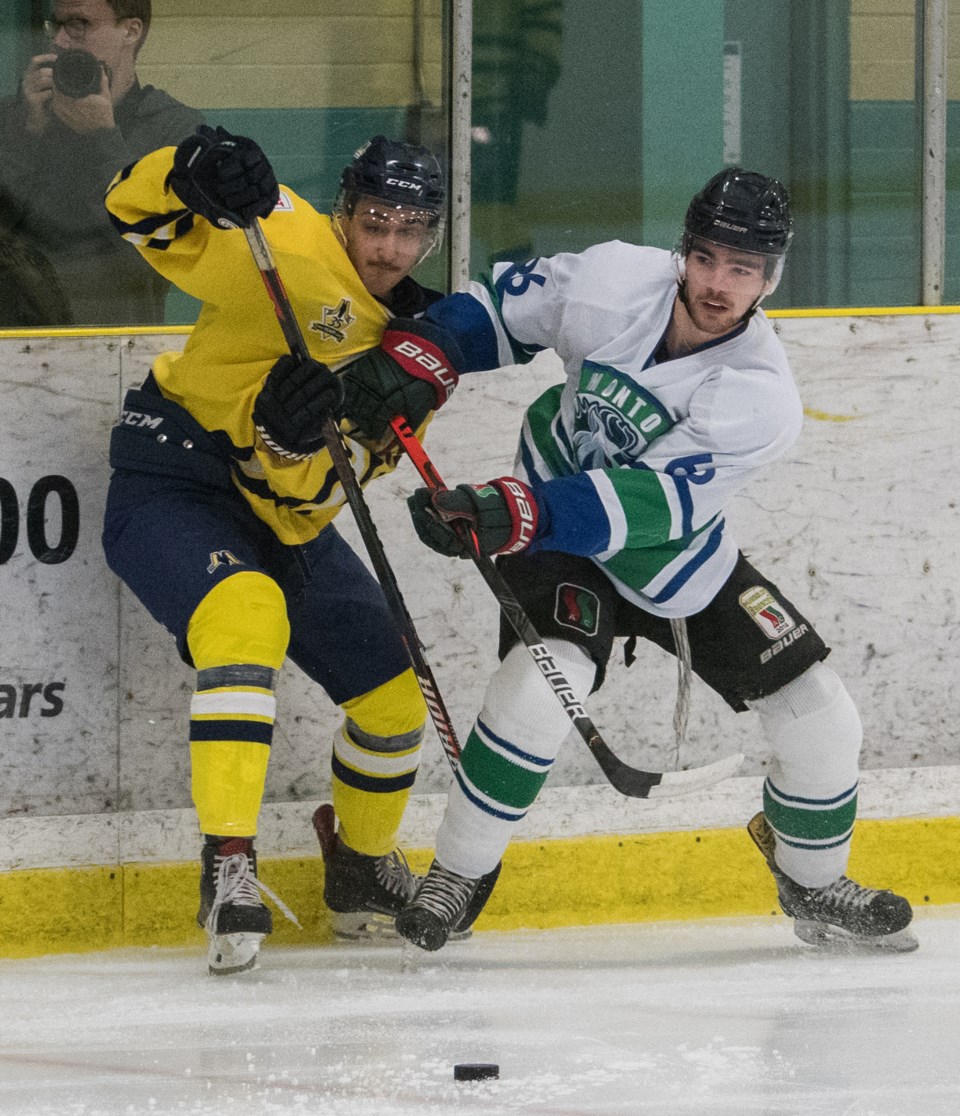 COMPETITOR – Cole Gupta, left, of the St. Albert Merchants battles for the puck against Bo Adam of the Edmonton Mustangs in Capital Junior B Hockey League action at Jarome Iginla Arena. The Merchants won 9-3 Friday and Sunday's 8-6 decision against the Strathcona Bruins in Fultonvale was the team's fourth victory in a row and the seventh in eight games. Friday the Merchants (9-5) host the CJHL champion Beverly Warriors at 8 p.m. JOHN LUCAS/St. Albert Gazette

The St. Albert Merchants skate into Friday’s home game against the defending Capital Junior B Hockey League champions with a season-high four victories in a row.

Puck drop is 8 p.m. against the Beverly Warriors (12-2) at Jarome Iginla Arena.

The seventh win in eight games for the Merchants (9-5) was Sunday’s 8-6 dust-up against the Strathcona Bruins (5-9-1) in Fultonvale.

The Merchants were charged with 13 infractions for 74 minutes, with Aidan West racking up 32 minutes in the fight-filled affair, and Strathcona was penalized 10 times for 42 minutes.

The teams also combined for eight goals in the opening period as the Merchants led 5-3 on markers by Cole Gupta, Scott Lancaster and Ryan Cooper at even strength and Bryce Sturm and Ryan Deets on the power play.

Stuart Dovey in the second and Gupta and Sturm in the third rounded out the scoring.

The fourth win in six home games for the Merchants was Friday’s 9-3 rout of the Edmonton Mustangs (1-12).

The lone non even-strength goal by the Merchants was scored by Wilkins on the power play for his second of the night.

In the CJHL scoring race, Sturm and Cooper are second and third with 27 and 26 points, respectively, and Dovey is fifth with 25.

Dovey is also the team leader in goals with 12.

The St. Albert Slash remain undefeated despite playing with a shorthanded lineup last weekend in the Alberta Female Hockey League.

With five players unavailable because of Team Alberta commitments at the U18 nationals, the Slash (9-0) posted victories of 4-3 in overtime against the Lloydminster Steelers (3-4-1) and 4-0 against the Edmonton Pandas (5-2) at Go Auto Arena.

Kali MacDonald sniped the winner 1:45 into the extra period against the Steelers, with Jenna Goodwin and Jaidia Pisani drawing assists, after Goodwin notched the equalizer with 27 seconds remaining in regulation time.

The Slash led 2-1 after two periods on goals by Cassidy Rhodes and captain Alli Reich.

Shots were 34-14 for the Slash with Mabel Maltais between the pipes.

Goodwin, Reich, Faith Greenough and Reece Mepham led the attack against the Pandas.

Shots were 18 apiece as Maltais (4-0, 1.22 GAA) recorded her second shutout of the season and the team’s fourth.

The Slash and Pandas faceoff again Friday at 8 p.m. in St. Albert and Saturday's game against the Rocky Mountain Raiders (3-4-3) starts at 2:30 p.m. in Dewinton.

Crandell and Evan Sundar at even strength and Hayden Selin and Jack Ketsa on the power play lit the lamp in the next game.

Crandell’s 20 points in 12 games is tied for third in the AMBHL and his 12 goals are three back of the leading scorer.

The Sabres (9-3) are winners of three straight and five of the last six games as the top nitro north division team for third place overall in the AMBHL.

The third straight win for the St. Albert Sharks was also the fourth in five games for the midget elite team in the Alberta Female Hockey League.

Saturday’s 5-2 decision against the Lloydminster Steelers (4-2) in the Border City featured a three-goal outburst during a 1:46 span in the third period to snap a 2-2 stalemate.

Sierra Whillans potted two of her three goals in the third and Elle Harapchuk notched the team’s last goal.

Janay Williams (power play) made it 2-0 in the first period.

Shots were 44-17 for the Sharks as netminder Natalie Balog started her first game of the season.

The night before in St. Albert, Williams slotted the 5-4 overtime winner against the Sherwood Park Fury (0-4-1) after the Sharks pulled even with Mikayla Sarapuk’s power-play tally with 2:17 to play.

Whillans potted a pair in her season debut and Jenna Kociuba also scored as the Sharks led 3-0 after the first.

Upcoming for the Sharks, provincial silver medallists the last two years, are the Edmonton Pandas (3-2-2) Nov. 15 at 8 p.m. at Go Auto Arena.

The Flyers skated Monday against the KC Centennials and the score was unavailable at press time.

The first win after two losses and two ties was 6-3 over the host Leduc Oil Kings (4-5-2) Saturday.

Liam Cochrane and Aidan Taylor each had two helpers and Damon Cunningham (2-2-3, 4.90 GAA) also chipped in with an assist while stopping a game-high 43 shots.