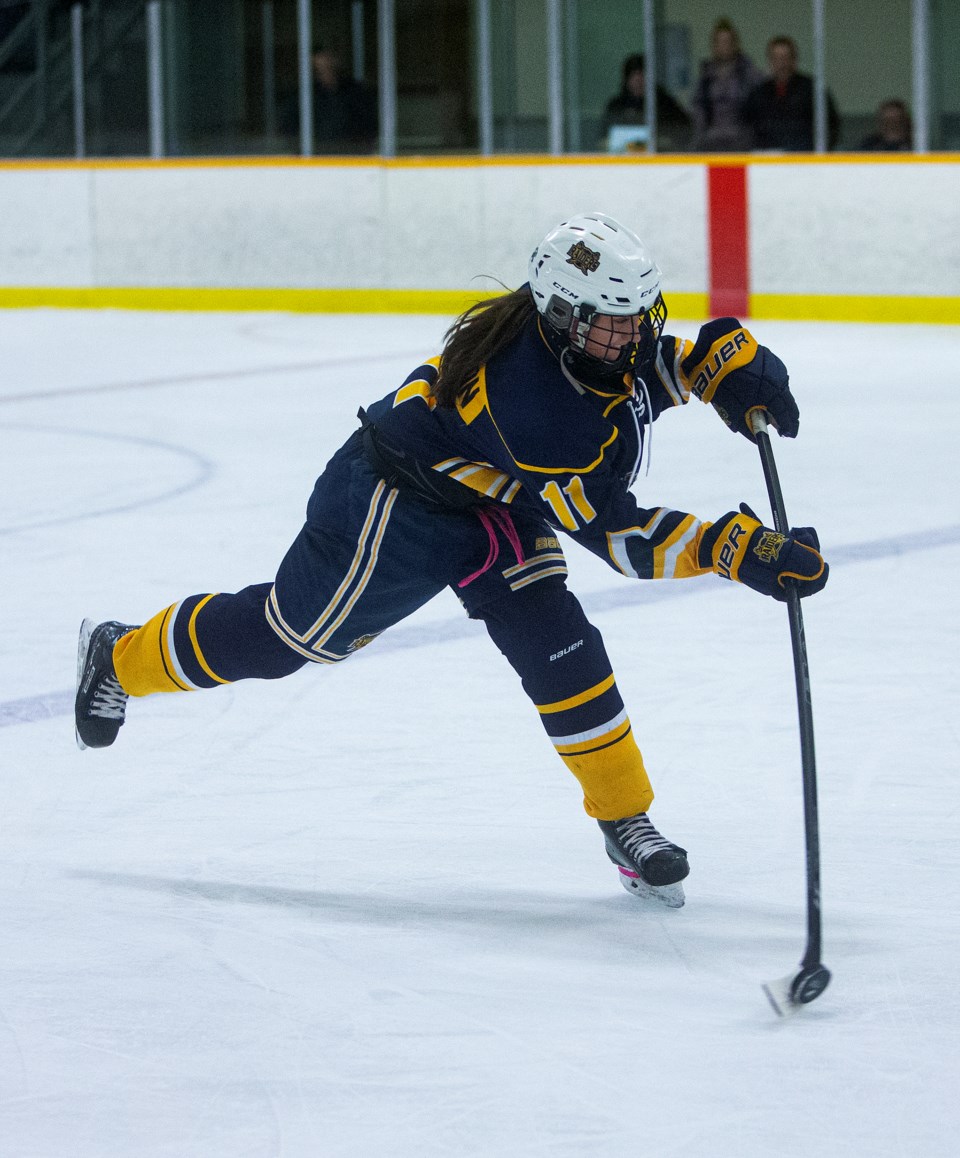 On Nov. 22, the seven-year-old niece of Steel assistant coach Cary Marko lost her fight against adenoid cystic carcinoma, a rare cancer in adults and even rarer in children.

As a team the Steel showed their support for the Marko family with a donation to Jenna’s GoFundMe. Her wish was to raise money to buy toys for sick children at Stollery Children’s Hospital and $2,180 was contributed to the GoFundMe page through parent donations.

In a show of support, the Steel had pink tape on their sticks and special pink socks flown in to wear. The Sturgeon players also had their sticks taped in pink.

Nico Gallo, Joshua Cyr, Jayden Ryan tallied and the second goal of the night by Jayden Antunes was a shorthand effort into an empty net.

The Steel are led offensively this season by Sean Mitchell’s 16 points and Antunes’ eight goals.

The defending Playoff Cup champion St. Albert Source for Sports Crusaders had three wins without a loss in November before Friday’s midget AA contest in the Northern Alberta Hockey League.

The score against the Fort Saskatchewan Rangers (3-10) was unavailable at press time.

The Crusaders (10-0-1) skated into the weekend as the Besa division leaders while tied with the Beaumont Braves (10-1-1) of the CanAccom division and NEBC Yukon Trackers (10-1-1) of the Milltech division for second overall in points behind the Anderson division Maple Leafs (11-0-1) in the 23-team NAHL.

The Crusaders are coming off last Saturday’s 6-2 result against the Lakeland Panthers (5-8-1) in Cold Lake.

The first of two goals by Carter MacDonald was also scored with the man advantage to make it 3-0 early in the second period.

Carter Stock also struck on the power play to extend the lead to 6-1 halfway through the third.

Prior to Friday's match, Brady Harroun was the top scorer on the Crusaders with 13 goals and 21 points, followed by Kaelan Shelton’s nine goals and 16 points and Spofford’s eight goals and 15 points.

The next home game is Wednesday versus the Strathcona Warriors (6-5-2) at 8:45 p.m. at Troy Murray Arena.

The eighth game without a loss for the St. Albert Gregg Distributors Sabres was recorded Wednesday in the Alberta Major Bantam Hockey League.

Carmelo Crandall’s second goal of the game and 19th of the season snapped a 4-4 tie toward the end of the third period.

The outcome left the Sabres with a 6-0-1 record in November after going 5-2 in October.

The Sabres are in action against the Maple Leafs (1-12-1) Sunday at 8 p.m. at Millwoods Arena and 8:15 p.m. Friday at Callingwood Twin Arenas.

The midget elite St. Albert Sharks are back on the ice tonight in the Alberta Female Hockey League.

Ella Soltis opened the scoring in the second and Sarapuk put the Sharks on top 2-1 in the third.

The Chiefs tied it at two on the power play at 9:22 of the third.

Elle Harapchuk, Sierra Whillans and Kaitlyn Black netted goals before the Fury struck on the power play halfway through the third.

Shots were 22-17 for the Fury as Natalie Balog (2-1, 1.49 GAA) backstopped the Sharks to their second victory after losing 2-0 to Calgary Fire Red (6-2) Nov. 17 in St. Albert. It was the first AFHL match between the teams since Calgary defeated the Sharks 5-1 in the 2019 provincial final at Grande Prairie

Sebastian Laurent’s two goals included a power-play tally to make it 4-0 at 7:41 of the second period.