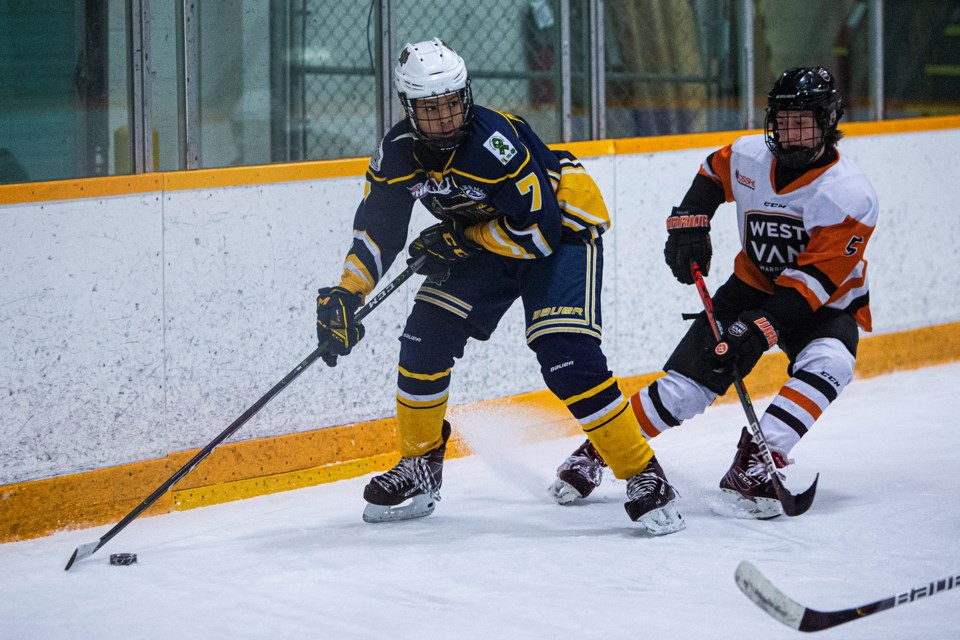 PLAYMAKER – Carmelo Crandell, captain of the St. Albert Gregg Distributors Sabres and their top scorer with 26 goals and 41 points, looks for a teammate in the Jan. 19 game against the West Van Academy Warriors at the John Reid Memorial Tournament. The Sabres (21-6-2) are tied for third overall in the Alberta Major Bantam Hockey League as the top north conference team with four games remaining before the playoffs. Today at 3:15 p.m. the Sabres play the PAC Saints (14-14-1) at Grant Fuhr Arena and Monday's game against the SSAC Lions (13-11-6) starts at 6:45 p.m. at Jarome Iginla Arena. CHRIS COLBOURNE/St. Albert Gazette

The St. Albert Slash skate into the weekend as the runaway leaders in the Alberta Female Hockey League.

The Slash are winners of six of the last seven games since the Christmas break.

Jenna Goodwin leads the AFHL in goals with 12 and is tied for first in points with 20.

The Raiders (26-1-4) will finish first overall with the lowest goals-against average in the AMHL at 1.41.

Andreai Proctor-Ramirez leads all netminders with 14 wins, 1.15 GAA, .953 save percentage and five shutouts.

Ronin Pusch has scored a team-high 16 goals and captain Mathieu Gautier is first in points with 31.

The Raiders, last year’s provincial finalists, have a first-round bye as the top north division team for the second consecutive year for a berth in the best-of-five north semifinals.

The countdown to the playoffs continues this weekend for the St. Albert Gregg Distributors Sabres with four games left in the Alberta Major Bantam Hockey League.

Captain Carmelo Crandell ranks 10th in league scoring with 41 points and is the team leader in goals with 26.

The St. Albert Source for Sports Crusaders have two games on tap in three days in the Northern Alberta Midget AA Hockey League.

Brady Harroun is the NAMHL’s top goal scorer with 37 and is tied for third in points with 57.

Kaelan Shelton is second on the Crusaders with 23 goals and 45 points.

Meanwhile, the St. Albert Steel are in Fort McMurray this weekend for two games against the Barons (10-17-1).

The Steel (21-5-1) are ranked third overall in the NAMHL as the second-place team behind the Crusaders in the Besa division.

Brett Reiter leads the Crusaders with 30 assists and 45 points, followed by Aidyn Hutchinson’s 19 goals and 42 points and Joshua Cyr’s 18 goals and 38 points.