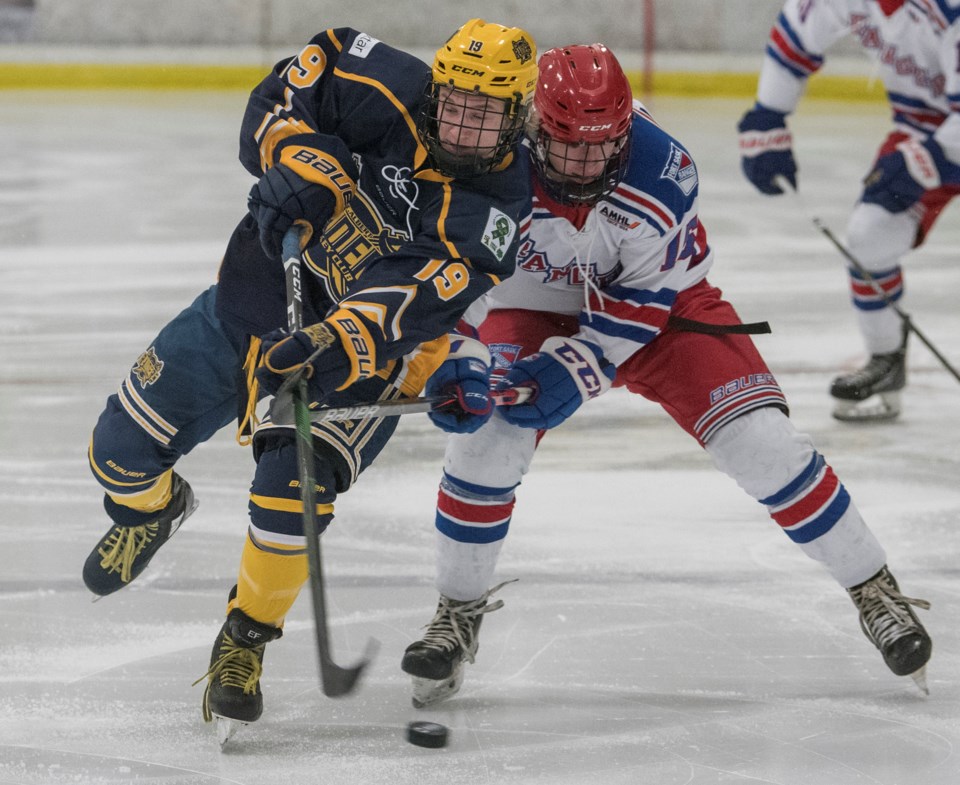 HASSLED – Evan Forrest of the St. Albert Nektar Raiders is bothered by Noah Kramps, a former Raider with the Fort Saskatchewan Rangers, in the 4-2 win by the St. Albert squad Feb. 1 in the Alberta Midget AAA Hockey League. The teams close out the regular season Saturday at 2:30 p.m. at JRC Arena. The Raiders (26-1-4) are first overall in the AMHL as the north division pennant winners for the second consecutive year and the Rangers (15-12-4) are third in the north standings. JOHN LUCAS/St. Albert Gazette

Shots were 40-17 for the Slash as the Fire ended Holly Borrett’s shutout bid with 2:58 remaining in regulation time.

Ross, Jaden Bogden, Bronwyn Boucher and Jayde Cadieux lit the lamp in the second game before the Fire replied with 6:54 to play.

The Slash outshot the visitors 31-19 as Borrett (10-1-1, 0.99 GAA) backstopped the team to its sixth win in seven games after the Christmas break.

The Esso Cup midget AAA national champions the last three years have six games left before the Final Frozen Four provincials, March 20 to 22 in Calgary, to represent Alberta in the Pacific Region national qualifier against the B.C. champion.

The last game for the St. Albert Nektar Raiders before the Alberta Midget AAA Hockey League playoffs is Saturday in Fort Saskatchewan.

The Raiders (26-1-4) skate into the playoffs as the No. 1 team in league play as the north division pennant winners two years in a row for a first-round bye and berth in the best-of-five north semifinal.

The Raiders are also first in goals-against average at 1.41 and second in goals scored with 4.06 per game.

In last year’s AMHL provincial final, the Buffaloes swept the Raiders in three games and the first two were decided in overtime, including a penalty shot for the winner in the series opener.

The Raiders have five returnees on the roster from the 6-5 playoff team that was 1-4 in OT games after going 19-11-4 in the regular season.

Ronin Pusch punished the Chiefs with four goals, three at even strength and one on the power play, for a team-high 16 in 31 games.

The previous game for the Raiders was the scoreless draw against the visiting Calgary Royals (10-15-6) Feb. 2.