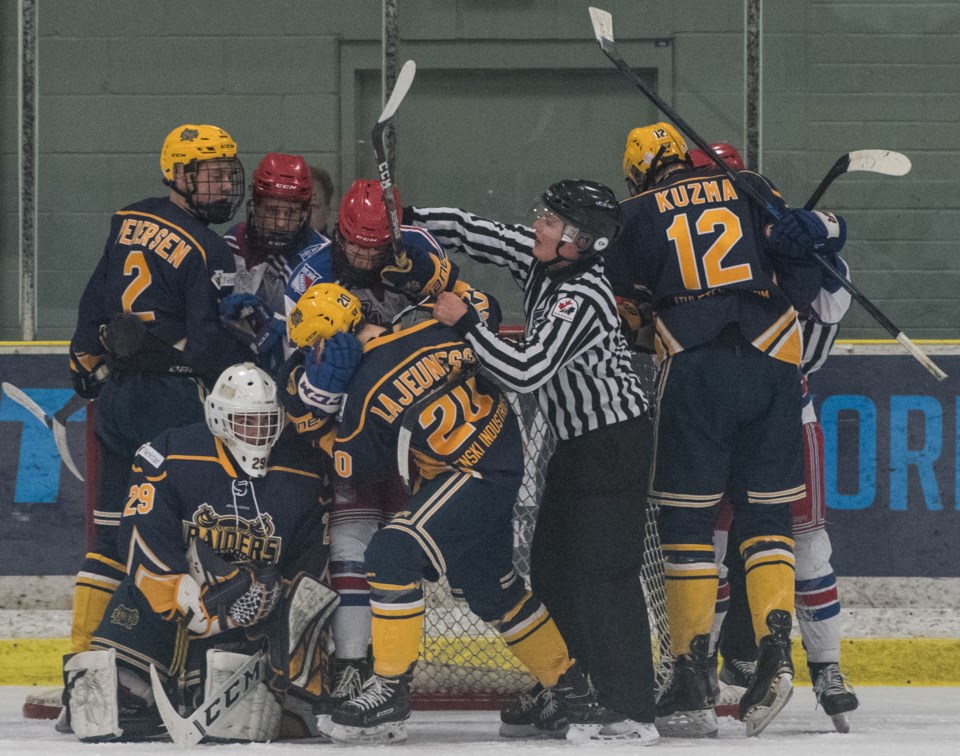 PLAYOFF SCRUM – Netminder Andrei Proctor-Ramirez of the St. Albert Nektar Raiders has company in the crease during a heated moment with the Fort Saskatchewan Rangers in the Alberta Midget AAA Hockey League playoffs. Thursday's 4-0 win by the Raiders at Jarome Iginla Arena marked the last game in the best-of-five north division final before Hockey Canada cancelled its sanctioned activities, including all Hockey Alberta sanctioned events, until further notice, effective Friday because of the ongoing COVID-19 pandemic. The Raiders (32-2-4) led the series 2-1. JOHN LUCAS/St. Albert Gazette

The St. Albert Nektar Raiders won their last playoff game on the eve of Hockey Canada’s decision to cancel its sanctioned activities, including national championships, until further notice.

Hockey Canada’s announcement Thursday night over the ongoing COVID-19 pandemic cited the health and safety of all participants in the sport, including players, coaches, staff, officials, family, volunteers and the general public.

Game three was played with only parents from both teams allowed in Jarome Iginla Arena after Alberta Health Services announced Thursday afternoon all gatherings of more than 250 people should be cancelled to limit the spread of COVID-19.

Andrei Proctor-Ramirez faced 34 shots while posting his second shutout of the series.

The Raiders broke the game open in the second period on goals by captain Mathieu Gautier, with Ronin Pusch and Kyle Norman drawing assists, Norman’s deflection of Tye Pedersen’s one timer and Chase Visser’s tap-in from Evan Forrest.

Norman’s empty netter closed out the win as the Raiders finished with 34 shots.

The first loss for the Raiders (32-2-4) after 25 league and playoff games was 3-2 in double overtime Tuesday in Fort Saskatchewan.

Ty Hodge, an affiliate, and Matthew Reidy replied for the visitors.

Game one was 7-0 Raiders with Proctor-Ramirez stopping a game-high 36 shots for last year’s provincial finalists.

The Raiders were ranked No. 1 in the AMHL playoffs in their quest to win the provincial championship for the first time since 1990.

The decision by Hockey Canada to cancel its sanctioned activities, effective Friday, because of the COVID-19 pandemic ended the playoff run for the St. Albert Source for Sports Crusaders in the Northern Alberta Midget AA Hockey League.

The best-of-three metro conference between the Crusaders, the defending Playoff Cup champions, and the Canadian Athletic Club was to start Friday night in St. Albert.

The Crusaders (28-3-1), the No. 1 team in the NAMHL regular season, and Canadians (22-7-3) won their respective divisional playoff tournaments.

The sixth win without a loss for the Crusaders in the playoffs was Wednesday’s 5-3 showdown against the St. Albert Steel (25-5-2) in the Besa division tournament final at Spruce Grove.

The Crusaders battled back from a 2-0 deficit after 40 minutes with five goals in the third period.

It was 3-2 Steel when Ethan Pool tied it up with 6:22 to play and Lucas Sadownyk slotted the winner with 70 seconds remaining.

Reiter was the top NAMHL playoff scorer with 22 points and the co-leader with Hutchinson in goals with eight apiece.

Hutchinson also ranked second overall in points with 16 and Cyr was third on the Steel with six goals and 13 points.

The Sabres finished 29-9-3 overall after the 3-1 series clincher by the Lloydminster Bobcats in game four of the best-of-five north conference final.

The series started with the Sabres winning 5-4 in overtime on Evan Sundar’s second goal of the night 33 seconds into the extra period last Friday in St. Albert.

The Bobcats are 25-9-7 overall after rattling off victories of 4-1 Sunday in the Border City and 4-3 Monday in St. Albert before wrapping up the series Wednesday on home ice.

It was 3-0 Bobcats when Ashton Hutchinson scored with 3:29 left in the second period.

The Bobcats recorded their fifth power-play goal against the Sabres in the win, in addition to three shorthand markers in two previous games.

Two of the three power-play goals for the Sabres in the series were scored in game one.

The Sabres also beat the Bobcats 4-3 in the B semifinal of the John Reid Memorial Tournament.

Sundar led the Sabres in playoff scoring with five goals and 10 points and captain Carmelo Crandell was second on the team in points with eight.

The last three playoff wins for the Sabres were OT affairs as Ben Costantino and Jaden Beauchamp lit the lamp in sudden-death to sweep the best-of-three nitro north division playoff against the SSAC Lions (13-13-7).

This year’s roster of Sabres included four returning players – Crandall and Hutchinson as forwards, Roberts and defenceman Ben Belyea – from the 13-15-5 team that tied for third in the nitro standings and in the playoffs finished 3-2 as division finalists. 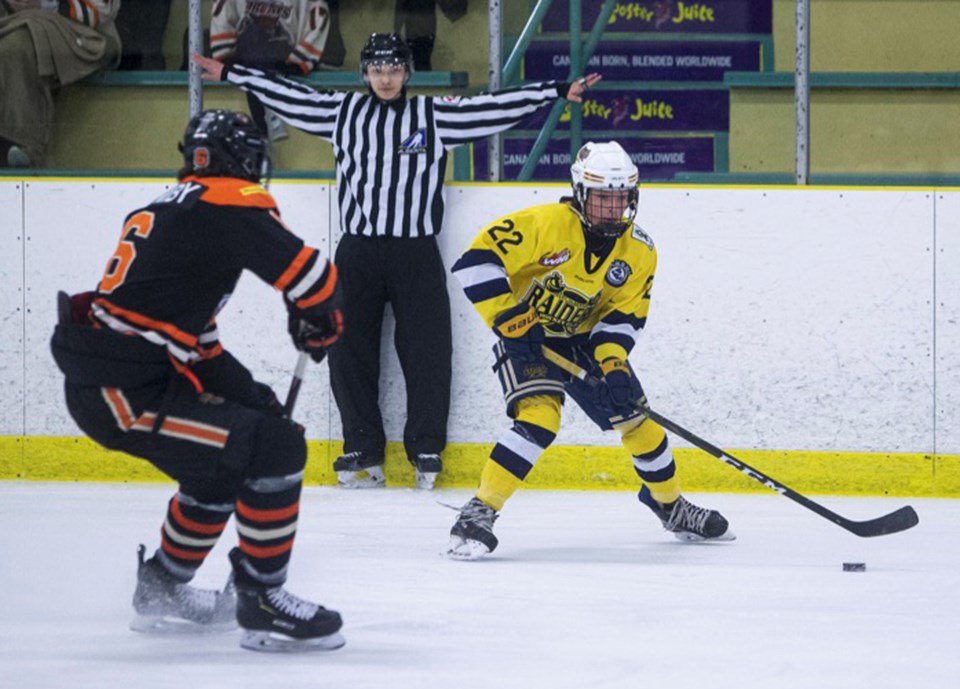 SURVEYING THE SITUATION – Ashton Cumby, left, of the Lloydminster Bobcats keeps an eye on Hayden Selin of the St. Albert Gregg Distributors Sabres in the north conference final in the Alberta Major Bantam Hockey League. The Bobcats (25-9-7) eliminated the Sabres (29-9-3) in game four of the best-of-five playoff in Wednesday's 3-1 decision at Lloydminster. The Sabres won the series opener 5-4 in overtime last Friday in St. Albert before dropping the next three games. CHRIS COLBOURNE/St. Albert Gazette