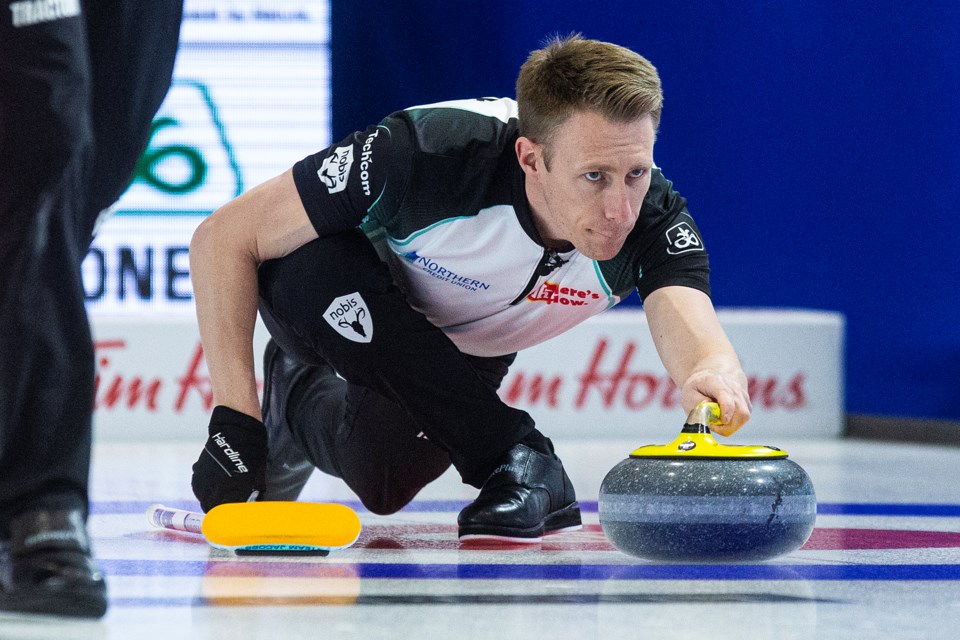 ROCK SOLID – Marc Kennedy of St. Albert lines up a shot for the Brad Jacobs' rink of Northern Ontario. Team Jacobs is ranked first in the World Curling Tour's money list at $103,500 and the Order of Merit point standings and is also the Canadian Team Ranking System leader in points. The next competition for the Sault Ste. Marie-based rink of lead Ryan Harnden, second E.J. Harnden and Kennedy at third is the Grand Slam of Curling's Meridian Canadian Open, Jan. 14 to 19 at Yorkton, Sask. Jacobs won the last two Grand Slams – Tour Challenge in November at Pictou County, N.S., and last month's Boost National at Conception Bay South, Nfld. Kennedy curled 100 per cent in the last two games at the Boost National and the Grand Slam victory was the 14th for the two-time Olympian and 2010 gold medallist, three-time Brier winner and two-time world champion. CHRIS COLBOURNE/St. Albert Gazette

The St. Albert Miners are hosting the President’s Cup lacrosse championship for the second time in five years at Leduc Recreation Centre.

The Aug. 30 to Sept. 6 tournament is the third senior B nationals in Alberta since the Spruce Grove Slash hosted in 2012.

Go Auto Arena, the home for the senior B and junior A Miners, is unavailable for nationals because of the installation of ice before the start of the tournament.

After winning three-straight President’s Cups, the Miners (4-3-1) lost the bronze-medal playoff 12-6 to Kahnawake.

The fourth-straight nationals for the Miners, bronze medallists in 2014 at Coquitlam, B.C., was also the fifth in six years and seventh since 2010 as RMLL provincial champions.

The Miners finished the season 25-4-1 overall and were 22-1 as winners of 22 consecutive games before back-to-back losses of 8-6 to the Axemen and 12-8 at the President's Cup with four games left in the round robin.

The run of three President’s Cup in a row for the Miners started in 2016 at Leduc with eight teams split into two pools instead of the single round-robin format to determine the playoff pairings and continued in 2017 at Hagersville, Ont., and 2018 at Nanaimo, B.C.

Highlighting this year’s feature game at the John Reid Memorial Tournament is the Teddy Bear Toss in support of the St. Albert Food Bank.

The St. Albert Gregg Distributors Sabres play the Los Angeles Jr. Kings on Jan. 16 at 8 p.m. at Go Auto Arena and fans are invited to bring a teddy bear, wrapped in a plastic bag, to throw onto the ice after the Sabres’ first goal.

The 42-game draw consists of four divisions divided into two pools to form the A, B and C playoff brackets.

Tournament organizers are expecting more than 1,000 students will attend the Prairie Storm game and approximately 600 will cheer on the Saints against St. George’s.

Last year the Sabres finished 1-4 and the tournament winner was Delta Wild Academy Green (6-0) by a 6-3 score in the final against the Okanagan Hockey Academy (4-1-1) of Edmonton.