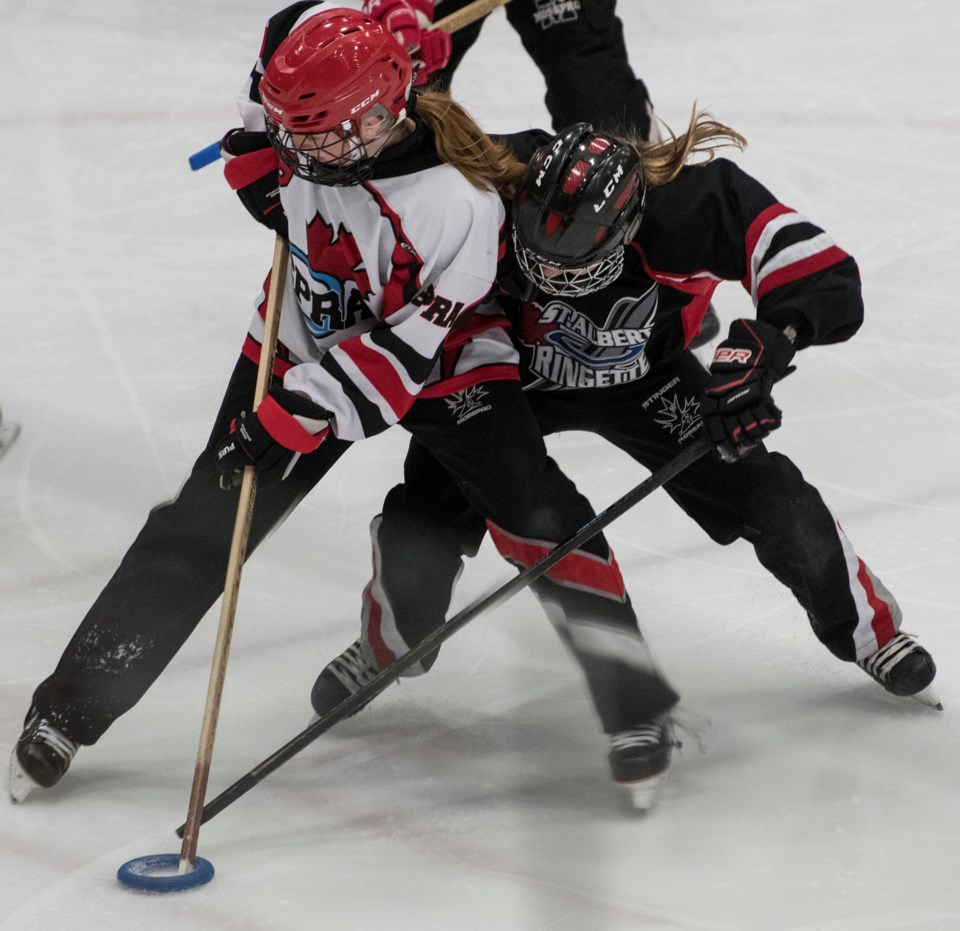 PRESSURE PLAY – Kamryn Waples of the U14AA St. Albert Mission challenges Teagan MacIntyre for the ring in the 6-6 draw against Sherwood Park Power on Jan. 31 in the Black Gold League. The regular season ends this weekend for the Mission with games against Red Deer Rush today at 1 p.m. at Mark Messier Arena and Edmonton Elite at 6:45 p.m. Sunday at Go Auto Arena. The Mission's overall record is 23-11-3-2. The AA provincials are Feb. 28 to March. 1 at Spruce Grove. JOHN LUCAS/St. Albert Gazette

Four wins in four games were all it took for Dan Holowaychuk of St. Albert to return to the (50-plus) provincials with the reigning champions.

Holowaychuk was the second for the Wade White rink at the 17-team playdowns last weekend in Sherwood Park to determine four qualifiers for provincials starting Wednesday in Lacombe.

Nationals are March 17 to 22 at Portage la Prairie, Man.

The A final was 7-2 in four ends against Vada Lindstrand of Camrose as White scored a decisive five-ender with hammer in the first end.

White also posted wins of 9-2 in six ends against Guy Algot of Sherwood Park, 5-4 in seven ends against Tony Germsheid of the Thistle and 6-0 in four ends against Rick Kravontka of the Ottewell.

White, third Barry Chwedoruk, Holowaychuk and lead George White are the first senior men’s foursome to three-peat in Alberta. They also won nationals in 2017 and worlds in 2018 and last year were bronze medallists at nationals.

White and Holowaychuk were 2013 provincial champions and national bronze medallists curling with Doug McLennan of St. Albert at third and George Parsons at lead.

Holowaychuk, the alternate for the legendary Ferbey Four, was inducted into the St. Albert Curling Club’s wall of fame in 2014.

Next week’s provincials in Lacombe include the senior women’s championship and the St. Albert rink skipped by Kathy Piper qualified at last weekend’s playdowns in Sherwood Park.

The last game for Piper was the 12-5 final against Laurie Knoll of Jasper Place as a steal of five in six started the handshakes.

Piper also counted five in two with the hammer to lead by three.

At the 2013 Dominion Curling Club Championships, Piper was the third, Conrad the second and Backer the lead for the Team Alberta rink skipped by Lauren Atkinson. The St. Albert curlers won three and lost three in pool play at Thunder Bay, Ont.

A pair of graduates from the Paul Kane high school football program have been identified as potential Canadian Football League draft prospects.

Defensive back Shaydon Philip and receiver Tyler Turner of the Alberta Golden Bears and products of the St. Albert Minor Football Association received invites to next month’s CFL combines.

The CFL national draft is April 30.

In 2015, Turner was one of five scout players on the UBC Thunderbirds that dressed for the Vanier Cup against the Montreal Carabins in Quebec City. Turner dislocated his shoulder early in the Canada West schedule and chose not to use a year of eligibility and spent the remainder of the season on the scout team.